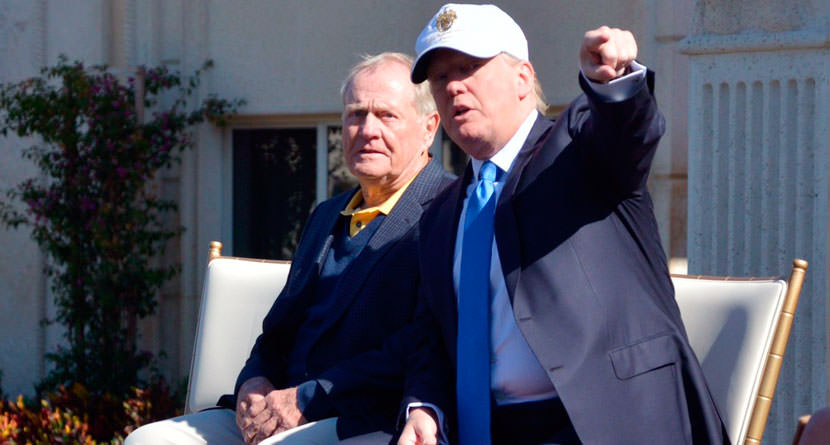 President Donald Trump rounded out his foursomes this past weekend with some pretty heady company in the golf world. Following a Friday round with Tiger Woods, Dustin Johnson and Brad Faxon, Trump teed it up with Jack Nicklaus and his son, Gary, at Trump International Golf Club, Jupiter.

ABC News’ David Caplan had more details about the Saturday round.

President Donald Trump sure keeps good company when it comes to hitting the links.

Nicklaus and Trump are longtime friends and business associates. Nicklaus designed the Trump Golf Links at Ferry Point golf course in the Bronx, which bears the designation of a “Jack Nicklaus Signature Golf Course.” And in 2015, the Jack Nicklaus Villa at Trump National Doral Golf Club in Doral, Florida, was unveiled.

Trump has taken to Twitter on several occasions to impart Nicklaus’ pearls of wisdom. “Resolve never to quit, never to give up, no matter what the situation. — Jack Nicklaus,” Trump tweeted in June 2014. And in March 2015 he tweeted, “Golf is a game of respect and sportsmanship; we have to respect its traditions and its rules. — Jack Nicklaus.”

Golf is a game of respect and sportsmanship; we have to respect its traditions and its rules. — Jack Nicklaus

Similar to Nicklaus, Woods has been enlisted to design Trump World Golf Club in Dubai.

Faxon wrote about his golf date with the president, Woods and Johnson for Golfweek, writing, “The President was gracious and entertaining. He told some stories, things he loves about the job and things he doesn’t love. I think he was excited to be in that group and we had a lot of fun.”