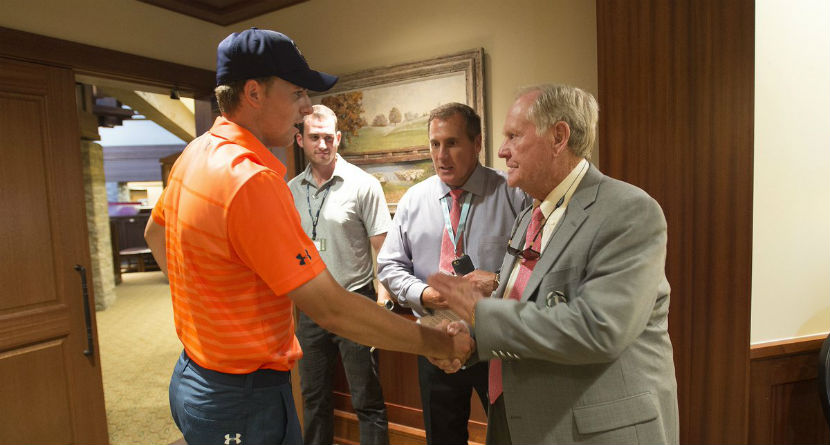 Jack Nicklaus knows a thing or two about winning majors. He also knows about winning three of them before the age of 24, just like Jordan Spieth. So when he offers to share some perspective on the magnitude of Spieth’s triumphant Open Championship win at Royal Birkdale on Sunday, we should all be paying attention.

“Jordan Spieth’s Open victory was a great display of guts, determination and skill. This was very enjoyable to watch,” the Golden Bear wrote after Spieth tapped in his final putt on 18 to claim the third leg of the career grand slam.

“Jordan semi had the wheels coming off on 13 with that tee shot. And while it did take him a long time between the tee shot and the next shot, Jordan figured out what to do. I don’t know if I would have figured out to go over to the driving range for that shot. That was an unbelievable decision and unbelievable 5.”

.@jordanspieth‘s @theopen victory was a great display of guts, determination and skill. This was very enjoyable to… https://t.co/50OfVsJbFH

“Much like Sergio Garcia’s par save at the 13th hole at Augusta National in the final round of the Masters, I believe Jordan’s bogey at the 13th hole today was the key to his round. He made that putt and all of a sudden he turned it on. It was as if he said, ‘Hey, I’ve let this thing get away from me. I’ve got to get back to work.’ Then he went boom, boom, boom….”

Of course, that “boom, boom, boom” Nicklaus is referring to was the birdie, eagle, birdie, birdie stretch Spieth used to slam the door to win his first Claret Jug. He now has a chance to finish off the career grand slam in August at the PGA Championship at the ripe age of 24, two years younger than Jack was when he won the 1966 Open Championship to complete his.

“Much was said today about the fact Jordan and I were able to win three legs of the Grand Slam before the age of 24. But if you look, he’s won 11 tournaments and I had won eight before 24. If you look at his victory total, his win today and the way he won today, Jordan has shown an amazing display of maturity for someone so young, and he has been doing that for a quite a while.”

Wow! What a wild back nine! Is @JordanSpieth something else?