The Odyssey Of James Nicholas: Inside Korn Ferry Tour Pro’s 1000-Mile Race To The First Tee 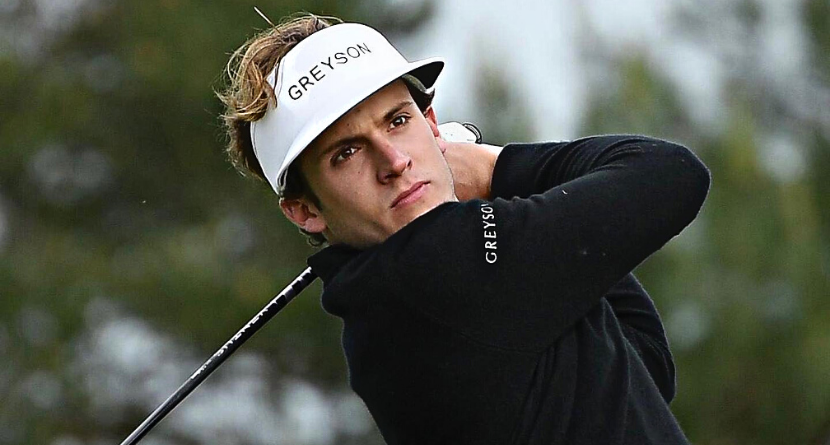 James Nicholas alternated between a trot and a brisk walk as he approached the first tee. He wore the sheepish grin of a golfer who knows he’s cut it way too close to the start of his scheduled round.

Time for a warm-up? A few swings on the range? No, those were luxuries the 25-year-old pro from Scarsdale, N.Y., couldn’t afford. He was on borrowed time — with borrowed clubs and borrowed shoes and a brand-new glove from the pro shop.

But lest you confuse Nicholas with the guy or gal in every weekend foursome who struggles with punctuality, let us explain how he found himself in this predicament.

You see, this was the final, frenzied leg of a 12-hour, thousand-mile trek to the Korn Ferry Tour’s AdventHealth Championship at Blue Hills Country Club in Kansas City, Mo. And it began in the same place three days earlier, with Nicholas failing to gain entry through a Monday qualifier after he was listed as the event’s 18th alternate.

Anything for a chance. pic.twitter.com/Wgd2VyEzTV

After enduring a canceled flight and returning home on a redeye to unwind and play some hockey with his brother, Nicholas watched his favorite team, the New York Rangers, lose a playoff game on Wednesday night — but that’s around the time a tough week started to turn around.

Nicholas learned he had moved all the way up the list to seventh alternate — and none of the players in front of him were expected to make the trip. All it would take was one player withdrawing, and their spot would be his.

“In golf, you don’t get many chances,” said Nicholas, who’s been a SwingU Ambassador since 2021. “Even if it’s a small chance, I’ve got to do whatever I can to take it.”

He started plotting a course back to Kansas City, but with the tournament’s afternoon wave set to start around noon local time, there was hardly any margin for travel complications.

So, naturally, Nicholas’ flight was delayed 90 minutes. He read a book for about an hour before he decided to activate the WiFi on his phone, setting free dozens of text messages alerting him to his fate: a player had indeed withdrawn, only now Nicholas’ main opponent was the clock.

With an expected arrival time of 11:33 a.m. and a 40-minute drive to the course awaiting him, Nicholas’ 12:15 p.m. tee time was a tall order. Thankfully, though, the caddie for the player who withdrew reached out and offered Nicholas a ride from the airport in exchange for carrying his bag in the event. And an understanding flight attendant announced the situation to the other passengers, who were happy to let him de-plane first.

There was just one final hurdle: baggage claim. Nicholas made arrangements to play with equipment on loan from Blue Hills’ head pro, which meant his own clubs would be left behind to ride the carousel until he could retrieve them after the round.

Armed with his own clubs for Round 2, Nicholas would ultimately miss the cut. But his tarmac-to-tee-box odyssey richly illustrates the relentlessness required to reach the next rung of the professional golf ladder — and he wouldn’t trade the experience for a better score.

Now back in New York… What a 36 hours… Not the scores I wanted to put up but got so much more out of this week. Thank you everyone for all the support and messages. This is just the beginning 💪🏻 @KornFerryTour pic.twitter.com/rhIgIXvynZ

“Opportunities are really, really hard to come by in this sport,” Nicholas said. “I’m just trying to put together as many opportunities as I can get because I know that one of them is going to click and it’s going to change my career.”

Now a week removed from the madness — and planning a brief reprieve from competition — Nicholas can certainly see the humor in it. And he plans to keep capitalizing on it. A former Ivy League player of the year at Yale, where he initially studied to become a doctor before deciding to pursue professional golf, Nicholas has many talents — including a deft hand on social media.

“The story blew up,” Nicholas said. “It makes the entire trip worth it. I missed the cut, which is a bummer. But my following has tripled and I’m able to reach out to sponsors at a higher level. Hopefully, the story enables me to get more opportunities out of it. In the end, it’s going to be worth it.”

The Golf Channel came calling for a video interview on Tuesday. And just about every other major golf outlet has written stories accompanied by a mesmerizing sequence captured by the Korn Ferry Tour content team.

In it, Nicholas can be seen hustling to meet the starter, greeting his playing partners and a rules official, slipping on a new glove from the pro shop and gathering himself for his opening tee shot — all in roughly the same amount of time it took for those events to transpire.

But it’s the drive itself that might induce the most stress in a fellow golfer. A tee shot with no warm-up? With people watching? No thanks.

Then again, it’s in that moment when Nicholas reminds you he’s not your buddy who’s always late.

“I just swung as hard as I could,” Nicholas said. “It might not have been a driver hole, but I needed the maximum amount of clubface. So I hit driver and I striped it. I hit it like 330 [yards] down the middle and had an 8-iron into a par 5. That was a good way to start the tournament.”