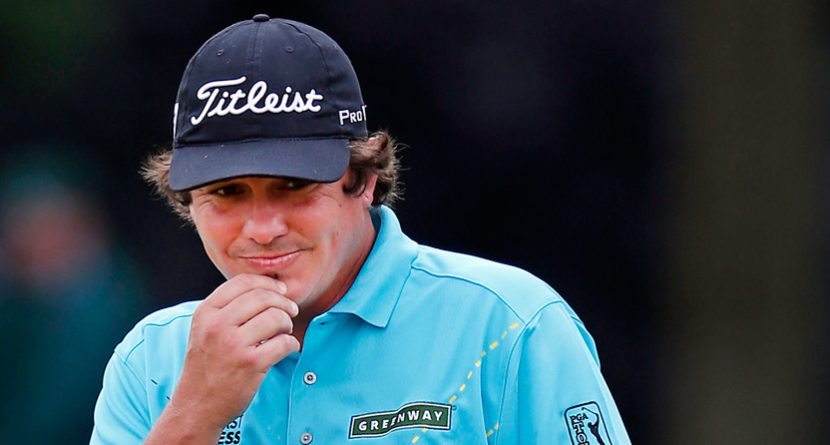 Is that Jason Dufner, or one of those lifelike crash test dummies?

The PGA Tour pro was in Irving, Texas this week to help promote the Byron Nelson Championship. Part of his day was spent with children at the Salesmanship Youth and Family Centers. Here are a few potential captions we came up with:

“Jason Dufner obeys his teacher and sits on his hands after trying to pull a female classmate’s hair.”

“Jason Dufner plays a real-life Billy Madison and goes back to elementary school.”

“A tired-looking Jason Dufner is clearly in need of an Arnold Palmer energy drink.”

“With tousled hair and giant shoes, a clown visits with Texas children On Thursday.”

Dufner headed to Twitter in an effort to explain the odd photo: “What can I say, I was tired, my back hurt from sitting on the floor, and we were talking about relaxation and focusing.”

It was too late though, as the photo spread across the web. Fellow golfers and fans alike could not resist jumping on the new “Dufnering” craze and took to Twitter in droves, posting some hilarious recreations: Not to be left out, some of the players from the LPGA got in on the fun:
Paula Creamer Dufner was now a star off the course and was making guest appearances in a number of celebrity Dufnering shots:
Lindsay Vonn and Nadine Moze “Dufnering” obviously hit its pinnacle when the boys from “Duck Dynasty” had to stick their bills in it: Whenever you have a great meme, you have some great Photoshops: Then came the obligatory parade of animals:
Keegan Bradley Tweeted this Bear & Dog The meme may have finally “jumped the shark” as merchandise started to pop up: Finally, Dufner brought it all home with a shot at his alma mater, Auburn: Other Hot Links:
– Who Is Baba Booey and Why Do Golf Fans Yell That Name?
– Jason Dufner Puts Wife Amanda Before Auburn Football
– Batman-Inspired Golf Cart Sells for Big Bucks on eBay