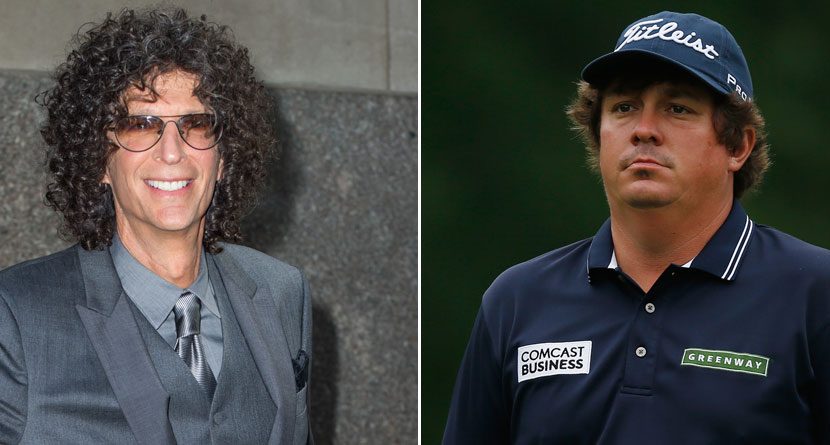 Howard Stern doesn’t know a lot about golf. He claims to have driven a golf ball over 300 yards, but he’s never boasted about being smart about the sport.

He admitted as much Tuesday morning, when he welcomed a pro golfer on his ultra-popular radio show for what may be the first time ever. Sunday’s PGA Championship winner, Jason Dufner, was his guest.

“What I know about golf could fit into a thimble,” Stern said.

It showed when, in all honestly, he asked Dufner if winning the PGA Championship was a big deal. Well, first of all, he didn’t know exactly what the tournament was even named. Later, Stern asked for clarification on what it meant to mark his ball (Dufner said he used coins from around the world). Thankfully Robin, Stern’s trusty sidekick, knew what she was talking about.

But at least a golfer was on the Howard Stern Show, supporting the notion that Stern is good for the game.

Dufner’s appearance stems from Stern’s fascination with golf fans yelling out “Baba Booey,” the nickname Stern gave his executive producer, Gary Dell’Abate, decades ago. If it weren’t for the Baba Booey phenomenon, Dufner is never asked to be on the show.

Keegan Bradley knows. He’s been a vocal Stern fan for years, and he’s also a major winner. Two years ago, he beat Dufner in a playoff at the PGA Championship. Did Bradley get a call from Stern’s people? Nope. Baba Booey bombs weren’t all the rage in 2011.

Pains me to say that duff did a good job on stern. I was hoping he’d be horrible and rushed outta there.

“It doesn’t bother me,” Dufner said. “Like you said, no one does it when we’re swinging or before we’re swinging. It happens afterwards. Obviously, people are trying to get noticed and clown around that way. But sometimes the stuff is pretty funny what they say.”

“The Baba Booey thing I like because I’m not a golf fan and I’ll tune into to see if someone yells out Baba Booey,” Stern said. “It’s bringing in new audience.”

Stern wondered if it was just a fad, but Dufner didn’t believe so.

“I don’t know man, it’s been going on all year,” he said. “I heard ‘mashed potatoes’ at the beginning of the year … now you hear ‘Baba Booey’ and you hear ‘Chewbacca’. They’ve always screamed ‘In the hole,’ and I heard ‘That’s what she said.'”

Dufner suggested Dell’Abate come out to a tournament and yell one out himself.

“What we need to do is have Baba Booey go to Jersey City next week (for The Barclays at Liberty National) and do it,” he said.

In all, Dufner was a fantastic interview. He’s widely chided for not being expressive enough. He told Stern that fellow Auburn alum, Bo Jackson, has even told him he’s too serious on the course and needs to lighten up.

Stern got him to lighten up. Dufner’s best answer came when Stern asked if he drinks to deal with the pressure of professional golf: “I don’t have the best tolerance for alcohol and if I was boozing all the time my golf game would be terrible.”

Then, of course, Stern brought up strippers and wondered if Dufner would “swing” with his wife, Amanda. Dufner quickly responded, “Oh no. She’s too good.” Stern: “Everyone says she’s way too hot for you.” Dufner: “Yeah, she probably is.”

These are questions no one in sports media has probably ever asked Dufner. But we’re learning more about the golfer because of Howard Stern. That’s good for golf.

It was an honor for @JasonDufner to meet a golf legend like me. #300