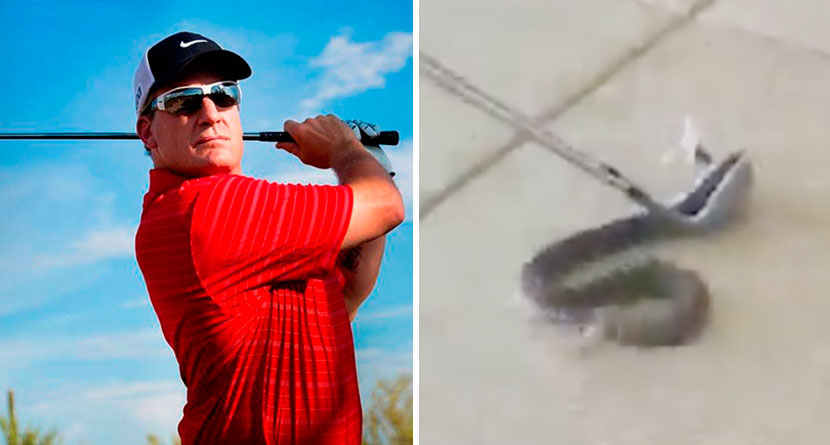 Former NHL great Jeremy Roenick has become a regular on the pro-am golf circuit and in his post-hockey life has taken quite an affinity for golf. Living in the golf haven of Arizona, Roenick seemingly is never too far from his clubs.

On Sunday, the former Chicago Blackhawk and Philadelphia Flyer showed why he made it so long in the NHL, while using some tools from his most recent obsession to dispatch of a rattlesnake that found its way into his garage.

Relaxing Sunday morning! What happens when you live in Arizona. pic.twitter.com/RhRwWTLs8s

Hat tip to Golf.com for locating the video of Roenick using a pair of clubs — as well as protecting himself with a nice golf glove — to get rid of the threat.

Jeremy Roenick might just be a psycho, but he’s pretty gifted with a golf club in his hands, apparently. The longtime professional hockey player has displayed an affinity for golf in his post-hockey life, but using clubs to corral a rattlesnake? That’s next level.

On Sunday, Roenick posted a video on Twitter of himself pinning a rattlesnake to the ground in his garage using two clubs and his bare hands.

To no surprise, his small audience echoed the statement: “You’re a psycho.” The best part about the video below might be that Roenick is doing it all while wearing a golf glove on his snake-bearing hand. He gleefully held his trophy in that hand before flinging the snake over a rock wall and out of his yard.