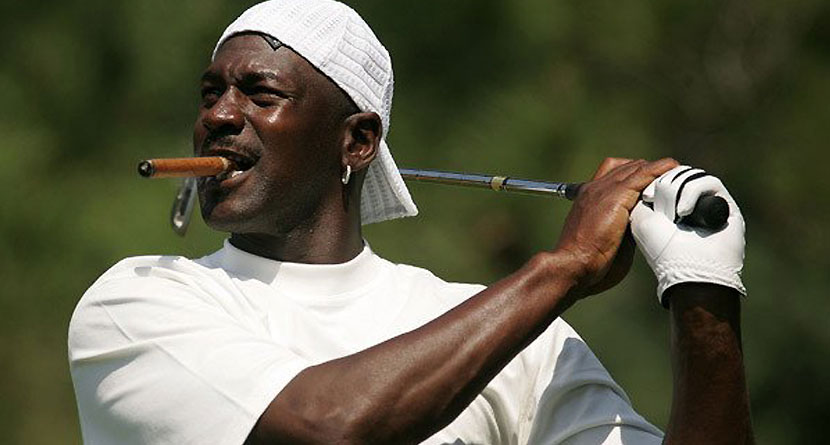 Michael Jordan’s love for golf and gambling and gambling while playing golf have been well documented, but whenever someone comes along with a new story, we’re all ears.

Asked if he had ever gambled with Jordan on the golf course, Roenick semi-reluctantly began to tell a story from the early 1990s about a day when he and Jordan played 36 holes at Sunset Ridge Country Club in the suburbs of Chicago.

With both of their regular seasons winding down, Roenick had a day off, so he took Jordan up on his offer for an early round.

MJ once dropped 52 points on the Cavs after playing 36 holes and housing beers all day with @Jeremy_Roenick. ?pic.twitter.com/h4mHaYR2lF

“‘Meet me at Sunset Ridge, early. We’re gonna go play 18 holes,’” Roenick relayed Jordan’s invite. “We played a round, I beat him for a couple thousand (dollars) and got ready to leave. Now, the Bulls are playing that night. They played Cleveland that night. I’m thinking he’s leaving, it’s 10 o’clock. He goes, ‘No, let’s go play again.’

“So we go and fill up a bag full of ice and Coors Light and walk again. We roll around another 18 and I take him for another couple (thousand dollars). Now we’ve been drinking all afternoon and he’s going from Sunset Ridge to the stadium, to play a game. I’m messing around. I’m like, “I’m gonna call my bookie. All the money you just lost to me, I’m putting on Cleveland.’

After finishing the story, Roenick went on to say that he believed Jordan was the greatest athlete he’s ever seen. And knowing the man, Roenick knew that he had lost everything he had won on the golf course earlier that day by halftime of the game.

“After the first half, my money was gone,” he said. “So much for 36 holes of grinding.”