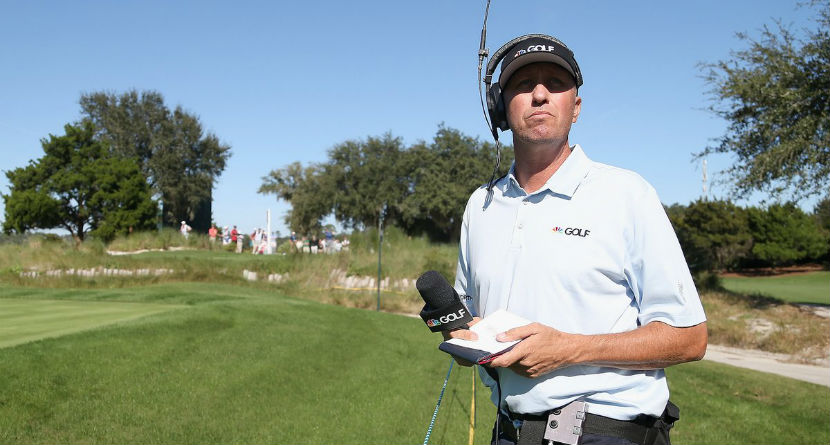 It didn’t Jim “Bones” Mackay long to find his next loop. But this time instead of carrying a staff bag, he’ll be sporting a microphone and an NBC logo. On Thursday, Golf Channel announced that the legendary caddie has signed a multi-year deal with NBC Sports Group as an on-course reporter beginning with their coverage of The Open Championship from Royal Birkdale July 20-23.

“For years, I have admired the fashion in which the NBC Sports team goes about covering the game and I am thrilled to be joining the team,” said Mackay in a press release. “During my years as a caddie, I had the opportunity to watch Tommy Roy work his magic in the production truck, and walk the fairways with Notah Begay, Roger Maltbie and Mark Rolfing. To join them and be a part of the coverage of some of golf’s biggest events – starting with The Open – is an opportunity I’m very grateful for, and I’m eager to add my take to help illustrate the strategic decisions golfers face inside the ropes.”

There was much speculation on what Bones might do next after he shockingly parted ways with his longtime boss, Phil Mickelson, at the end of June. Now it appears he will be taking those 25-years of experience and sharing it with perhaps the most important people of all, the viewers.

“Bones’ keen observations and ability to draw insight from personal experience will bring an original perspective to our coverage and complement our already well-respected broadcast team,” said Tommy Roy, lead golf producer for NBC Sports. “The player-caddie dynamic in golf is often one of the most compelling and unique narratives being captured during our coverage. Bones has a career’s worth of experience being immersed in the most pressure-packed situations on golf’s biggest stages working alongside Phil, one of the most cerebral champions in the sport.”

Here’s a preview of what we could expect…and it probably will be just as spectacular:

Phil and Bones have officially split.

It doesn’t get any better than this exchange from 2012. pic.twitter.com/zll38kLHsh