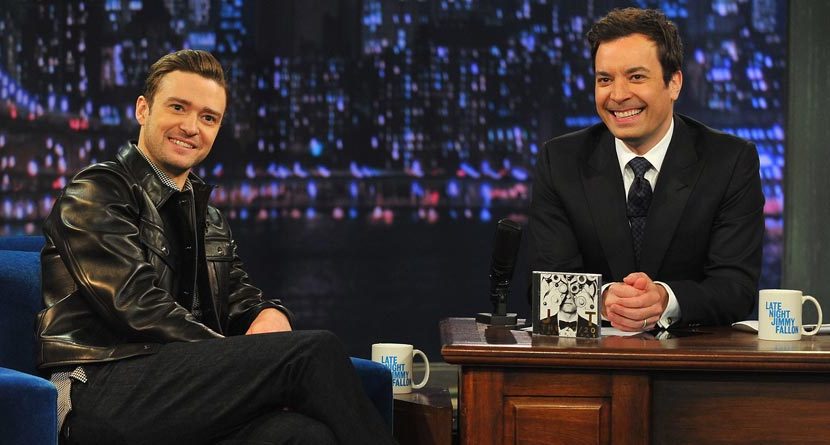 Jimmy Fallon is a known golf fanatic. He featured golf fairly often on his previous show, “Late Night with Jimmy Fallon,” and needless to say, the skits were hilarious.

He carried over his love of the game to his new gig, “The Tonight Show,” when he played a round of Roller Golf with Cameron Diaz (yes, his “playing partners” are pretty famous).

One of Fallon’s good friends, Justin Timberlake, is also a golf enthusiast. The two have only played one round together, but that hasn’t stopped Fallon from making Timberlake look bad on the course every time Jimmy plays.

Fallon ordered personalized golf balls with “J. Timberlake” stamped on them, which may seem like a strange idea. It’s actually hilarious.

“Just got my personalized golf balls in. Now when I hit them into the woods, I can find them. Or not. #hashtag” @JimmyFallon

In a recent interview, Fallon said he ordered the personalized golf balls so when he hits them into the woods, people think J.T. hit them there. It’s genius, really.

So funny, @jimmyfallon. I was just telling someone how my name was on your balls. #regram http://t.co/mffiYCNGwA

You may remember Fallon and Timberlake for teaming up to create one of the funniest skits on late-night television (more than 24 million views on YouTube) when they had a “Twitter conversation” in person, hashtagging everything possible. Maybe this is why they don’t often golf together? More giggling than golfing would get done.

Other Hot Links:
– The Fringe: Poulter Booted, Nantz ‘Not Good’ & Murray’s Advice
– Video: How Golf Balls Are Made
– To Push or Not To Push a Cart: Tour Pros Weigh In
– Golfstradamaus: The Memorial Tournament
– Which Colleges Produce the Best PGA Tour Pros?
– Phil Mickelson Sees Multiple Olympics, U.S. Open Wins in Future
– Long-Drive Champion Takes on Watermelon… and Wins