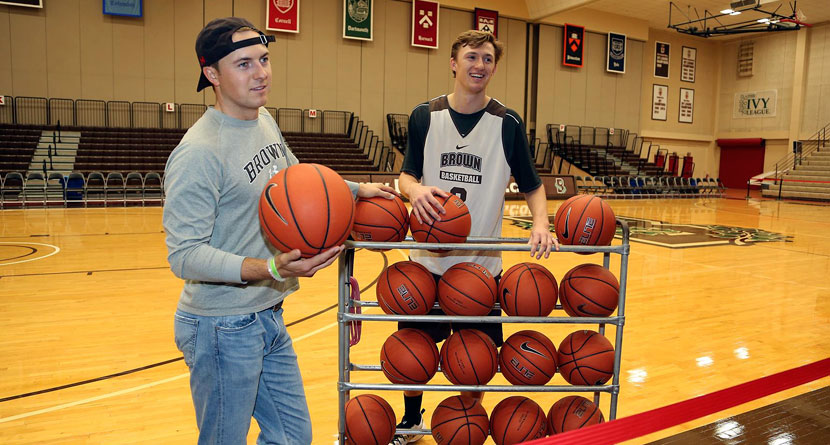 Sibling rivalries transcend fame, and that applies especially if you’re Jordan Spieth. The two-time major champion is as competitive as it gets and you need not look any further than what transpired before his younger brother’s basketball game on Thursday.

Steven Spieth, Jordan’s younger brother, is having a special senior season at Brown University, where he leads the team in points and rebounds. Regardless of Steven’s success on the hardwood, Jordan took steps to take him down in a skills competition prior to the Bears tilt with Maine earlier this week.

Jordan explained what his workout regiment looked like in a conference call ahead of the SBS Tournament of Champions, which kicks off the 2017 schedule next week.


Jordan Spieth is surely keeping his golf game sharp this winter as he prepares to defend at next month’s SBS Tournament of Champions in Hawaii. He apparently is also working on his jumpshot.

“At the moment I am starting my grind in the gym shooting a thousand shots a day so I don’t embarrass myself,” Spieth said Monday during a PGA Tour teleconference.

The Bears hosted Maine Thursday at 3:30 p.m., and Jordan plans to be in attendance. Jordan also is scheduled to participate in some sort of basketball-related activity before the game, he alluded to Monday.

“I think we’re doing something in the morning of the 22nd before his game,” Jordan said. “I’m not sure, he kind of set up something, we might be playing H.O.R.S.E. and it might be videoed.”

The video hasn’t been released yet, but we did get a sneak peek at a few things the Spieth brothers were doing via Brown’s Facebook page.

Without a winner being announced, we’re left with bated breath. However, if Steven’s performance against Maine was any indication, we’re betting on the younger brother.