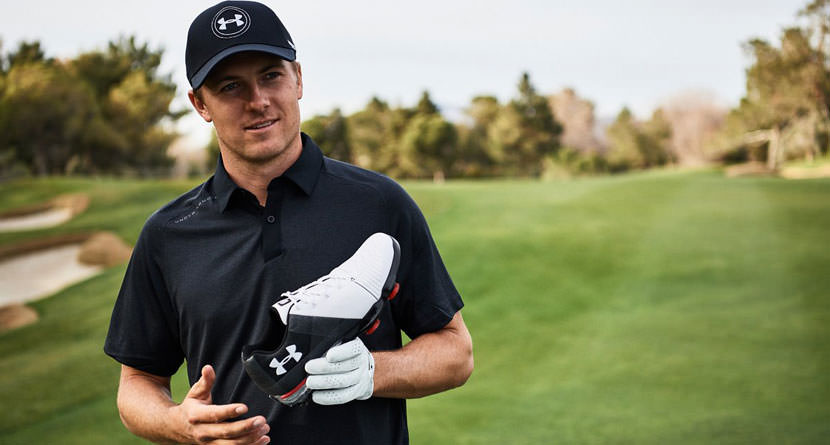 Much like the beginning of 2017, Jordan Spieth’s start to 2018 showed that the 24-year-old will be winning plenty both on and off the golf course. Fresh off a two-week stint in Hawaii in which he finished in solo 9th at the Sentry Tournament of Champions and T18 at the Sony Open, Spieth landed at another popular tourist destination — Las Vegas — to make a big reveal.

One year after launching his first signature golf shoe, Spieth and Under Armour were ready to unveil the second iteration of his line: the Spieth 2. Spieth also had some help from some of his UA friends, Michael Phelps and Bryce Harper, who were on hand to show off and speak about the shoe.

.@JordanSpieth met up with a friend while in Las Vegas releasing the new Spieth 2. pic.twitter.com/bCZxJzGA6n

Ashley Mayo of GolfDigest.com was on hand for the reveal.

“We’re in the second generation of my signature shoe, with hopefully a lot more to come,” said Spieth. “This one is an improvement over the Spieth One, I’m excited to start wearing it at Phoenix in a couple weeks.”

And Michael Phelps, a self-described “shoe snob,” says he loved breaking in the Spieth 2 during his round with Jordan at Shadow Creek.

“They were very, very, very comfortable,” said Phelps. “I’m very picky with my shoes and I loved them.”

.@JordanSpieth is MADE TO SCORE.

Introducing Spieth 2 – the newest footwear from Jordan and @UnderArmour. The shoe was rigorously tested by Spieth himself and built to help him accomplish one main goal: to score.#Spieth2 is now available for presale: https://t.co/wFKM8pKDo3 pic.twitter.com/n8akkDXNMr

New technology in the Spieth 2 includes Gore-Tex waterproofing, which offers total protection from moisture and rain without sacrificing breathability. And because strong TPU fibers are woven into the shoe’s upper, the Spieth 2 offers more support without being heavier. Just like the Spieth One, the Spieth 2 is engineered with spikes that are designed to resist rotational movement, thereby offering more traction and stability throughout the swing.

The Spieth 2 retails for $200 and is already available for presale. The shoe will officially land online and in stores on February 2nd and will be offered in six colors.