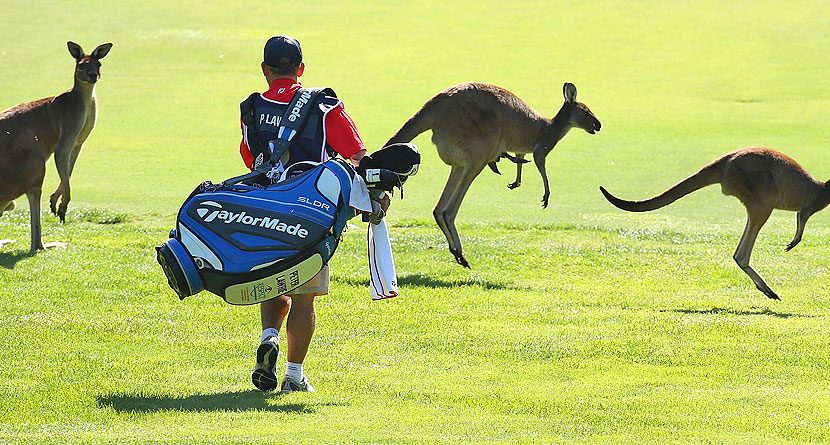 With golf’s first major of 2014 teeing off this week, defending champion and Australian Adam Scott did not disappoint with his plans of bringing some food from Down Under to his Masters Champions Dinner on Tuesday. Scott served as host for the annual feast because he took home the green jacket in 2013, and he provided his guests with a meal they’ve probably never had before.

After originally saying he may serve kangaroo, Scott added a new dish: bugs. He flew not one, not two, but three-dozen Moreton Bay Bugs from his homeland of Australia to Augusta for his fellow Masters champions to try. These “bugs” are actually flat-headed lobsters found in a body of water on the east coast of Australia, which is close to where Scott grew up.

The pre-tournament dinner is a tradition that dates back to 1952, when Hall-of-Famer Ben Hogan suggested it and hosted the first feast at Augusta National.

Related Link: Kangaroo: A Masters Champions Dinner Unlike Any Other?

Ever since, the defending champions of the Masters have been granted free reign on what to serve up to the rest of the participants the Tuesday night prior to the tournament. Scott turned heads a couple of months ago when he announced that he was planning to serve some grilled kangaroo before changing his mind earlier this week.

Without question, the Moreton Bay Bugs dish is a rarity at best, yet Scott said he wanted to serve something that everyone would enjoy and nothing too crazy. As the first Australian to win the green jacket, he said that there would definitely be a native tie to the dish he plans to introduce to everyone taking part in the festivities at Augusta.

Related Link: A Tradition Unlike Any Other: Dumb Masters Arguments

Scott’s unique entrée was certainly in good company with a long list of intriguing dishes past champions have offered up.

Although some thought it was a bit…boring?

However, Scott’s version was far from such. It appears his guests approved.

Here’s a pic of the menu from the Champions dinner….. pic.twitter.com/ce0D8NOtGN

In 2012, it was Charl Schwartzel who dished out an opening course consisting of a chilled seafood bar, which included shrimp, lobster, crab meat, crab legs and oysters. The main course was “braai,” a South African barbecue, which includes lamb chops, steaks and South African sausages.

And lefty Phil Mickelson offered up a Spanish-themed menu with seafood paella and machango-topped filet mignon as the entrees in 2011.

There is a catch to the selection process, however. The former champions are not required to eat what the defending champion selects. They can order off Augusta National’s generic menu, which includes steaks, chicken and fish dishes.

Last spring, Back9’s Jenn Bosworth and Charles Everett put their culinary skills to the test when they partnered with Chef Tyler Anderson to make some dishes from Champions Dinners’ past, yet were unsuccessful.

As we wind down towards the start of the Masters, here’s a look at some of the top dishes previous champions have served up to their cohorts as a way of whetting their appetite before teeing off – and how they fared at Augusta National afterwards.

Tiger Woods, 2003: Tiger brought back the porterhouse steak, chicken and sushi from his 2002 menu. Also on the menu were sashimi, salads, crab cakes, asparagus, mashed potatoes and a chocolate truffle cake.