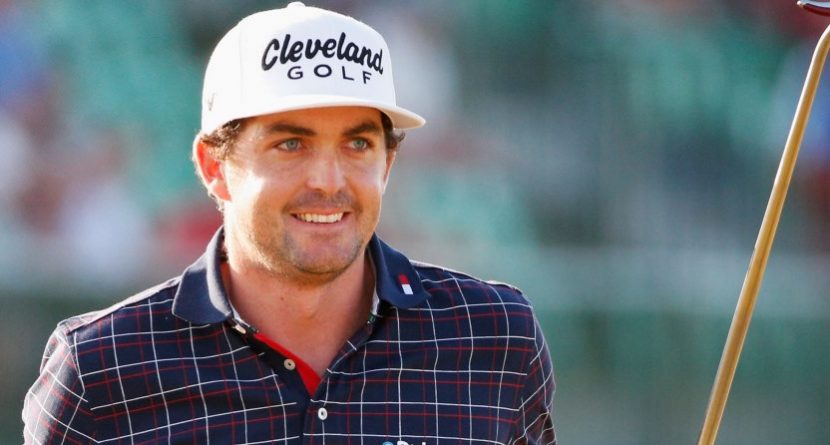 A week after PGA Championship winner Jason Dufner appeared on the Howard Stern Show – the first pro golfer ever to do so after winning a major – Stern’s biggest golfing fan got the next best thing: Keegan Bradley appeared Monday morning on The Wrap-Up Show with Gary Dell’Abate and Jon Hein.

In case you haven’t been following all the Baba Booey hullabaloo, Stern has taken an interest in golf of late because fans seem to be increasingly shouting out “Baba Booey” at tournaments after players hit their shots. Baba Booey is the nickname Stern gave his executive producer, Dell’Abate, decades ago.

That prompted Stern to invite Dufner onto the show following his first major victory, to which Bradley, one of Dufner’s good buddies, tweeted “Brutal!” while listening to Dufner on the show. Bradley then followed up with this:

Pains me to say that duff did a good job on stern. I was hoping he’d be horrible and rushed outta there.

Bradley was a brief topic of discussion during Dufner’s time on air, as it was brought to Stern’s attention that Bradley’s a fan and a good friend of Dufner’s. That led to Bradley’s sit-down with Baba Booey, the next best thing to Stern.

At about 9:30 a.m. ET Monday, Bradley followed up with a picture:

When the Wrap-Up kicked off, Bradley’s knowledge of the show clearly showed. He said he grew up listening to it and that Stern is his “idol.” Bradley tuned in often while driving from tournament to tournament as he climbed the golf ranks.

“When I’m down and having a bad round, I turn on the @HowardStern show and it’s like being home” – @Keegan_Bradley on Wrap Up Show #H100 Of course, the crew asked Bradley about the Baba Booey phenomenon going on, much of which Bradley has encouraged. Some golf fans know he’s a Stern fan, so he tends to get Baba Booey-ed more than others.

“I played with (Tiger Woods) at the PGA the first two rounds and he came up to me on the first tee and he goes, ‘There’s going to be a lot of Baba Booey’s with you today,'” Bradley said. “He’s asked me before what a Baba Booey is.”

Bradley believes the craze began at the 2012 Ryder Cup in Medinah, Ill., and that “a majority of the guys hate it, but I love it.”

Someone then mentioned Dell’Abate should show up this week for The Barclays at Liberty National in Jersey City, N.J., and just yell out, “Me! Me!” Dell’Abate then brought up a certain story: “There was a great article last week that said, ‘Howard Stern is good for the game of golf’ because he’s bringing people to watch the game.”

Bradley agreed, and thinks the frequency is picking up. “It’s definitely gotten really crazy over the past month,” he said.

The golfer clearly enjoyed his time on the Wrap-Up Show, and it’s safe to say that if he wins a tournament anytime soon, he’ll get time with Stern himself. Until then, Bradley’s cool hanging with the Stern staffers.

“If anybody from the Howard Stern Show wants to play golf with me,” he said, “I’m in.”

Other highlights from the show:

– The guys were disappointed to see that Paulina Gretzky got engaged over the weekend, but Bradley said she’s good for Dustin Johnson, one his good friends. He was surprised to hear about the engagement, though. “I was shocked that they got engaged. He said he was going to wait until I (proposed to my girlfriend) but that didn’t work out.”

– Prior to Dufner, John Daly is the only other golfer anyone can remember being on Stern’s show. Upon arriving, he asked for a beer and the staffers believe he’s one of the only people to ever smoke in studio. Of course, Bradley remembered that show.

– Dufner’s PGA victory and subsequent media tour helped him soar past Bradley in Twitter followers, but Bradley’s keen on catching up.

Other Hot Links:
– Who is Baba Booey?
– 9 Amazing Cars From Pebble Beach Concours
– 9 Announcers We’d Like to See on Fox’s Golf Broadcasts