Kevin Durant Gives Bubba Watson the Shoes Off his Feet 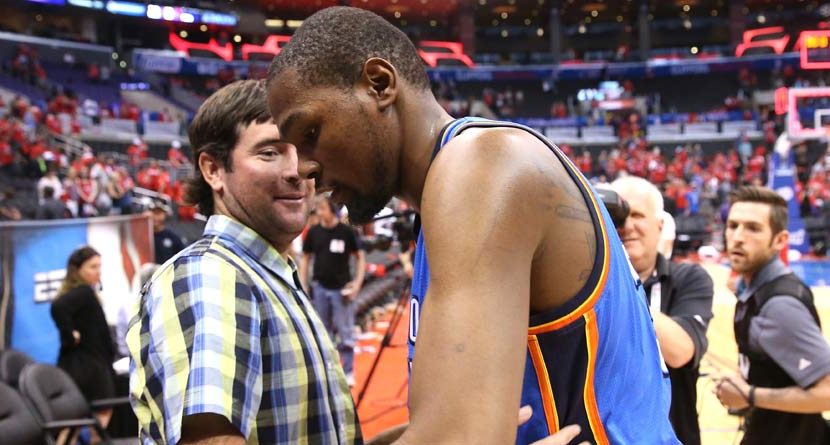 The stars were out in Los Angeles Thursday night, as celebrities and athletes flocked to the Staples Center to watch the Clippers take on the Oklahoma City Thunder in Game 6. Everyone from Rihanna to Matt Damon to Tony Romo was in attendance, as well as a two-time Masters champion, Bubba Watson.

Bubba sat courtside as the Thunder knocked off the Clippers to advance to the Western Conference finals, but the game may not have been the best part of his night.

Not only did Bubba have more green jackets than all the big names in attendance, but he was the only one to leave with a pair of Kevin Durant’s shoes. After the game, Durant went over to Watson and handed him the game-worn Nike KD VIs, as the two embraced each other in a man hug. That should make for a nice piece of memorabilia in the Watson household. Watson isn’t the only golfer to own a pair of KD VIs, though. At the Masters in April, Jason Dufner was spotted wearing a pair of the signature Durant shoes, but they weren’t game-worn like Bubba’s. Durant also signed a pair of his shoes for the Zach Johnson Foundation.

With all these golfers and their KD VIs, maybe we’ll see them turned into golf shoes one day.