Kick-Ass 9:~Getting Global and Younger 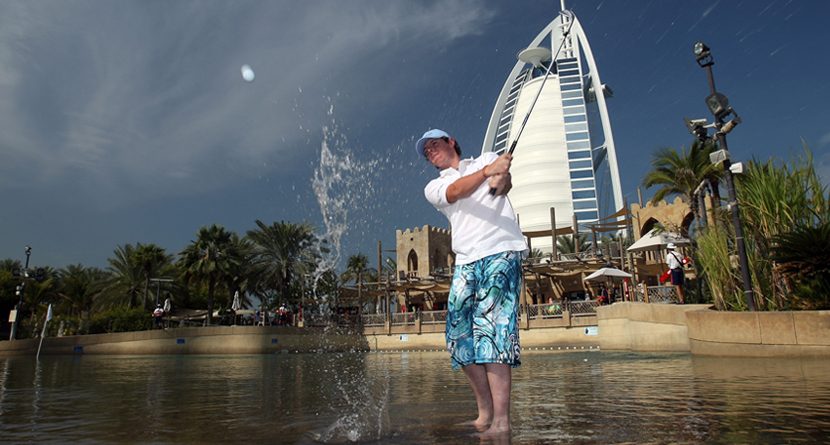 9. Fogging impressive
Faced with an interminable fog delay at the Farmers Insurance Open on Saturday, Jerry Kelly and Lucas Glover showed off for the cameras with this cool two-man trick shot.

8. Good week for Wood(s)
As Tiger Woods was rolling to victory, the suspiciously named Chris Wood (oh, you just happen to have that last name, buddy?) won the Qatar Masters in the Middle East, beating Sergio Garcia and other European stars. If this kind of trend keeps up, I might be tempted to change my last name to Watson or Watney or something. 7. New kid on the block
The golf section of the Internet nearly exploded this week when people saw this incredibly talented 17-month-old golfer. I don’t think I could make contact this many times in a row, and I’m a full-grown adult who almost never wears diapers.

6. Weir science
Sometimes you win the Green Jacket, and it all goes downhill from there. Mike Weir made his first cut since July 2011 at this week’s Farmers Insurance Open, coming off a 2012 season in which he missed 14 straight cuts and earned exactly zero dollars. Here’s hoping the 2003 Masters champion can find the magic again.

5. International love
The LPGA is going global — more global. The tour announced this week that it will hold the first International Crown event in 2014, pitting eight teams of four against each other in an Olympic-style showdown. Unlike the Solheim Cup, the championship will be open to golfers from outside the U.S. and Europe, bringing dominant Asian players like Yani Tseng into the fray. If I were her Taiwanese teammates, I’d get my head measured for that crown pretty soon. 4. Free advice
Helpful business magazine Forbes put out a list of “19 Tips For Closing A Deal on the Golf Course,” things like “take it easy on the alcohol” and “don’t curse.” Come to think of it, I should just print this out and memorize it for my normal daily life.

3. Premiering soon
Speaking of new competitions, a group of businessmen have just created the “Golf Premier League” in India. As in international soccer leagues, franchisees will field their own players, and guys like Darren Clarke and Angel Cabrera have already signed on. Rounds will be just 14 holes and they’ll play at night because, hey, let’s go crazy. 2. King’s speech
TaylorMade CEO Mark King, The head of the company behind “Rocketballz,” unloaded this week about the USGA and its rulemaking, saying that in 10 years the organization will be a “nonentity…they’re obsolete.” King is entitled to his opinion, but since he still needs the USGA’s approval on everything he manufactures, isn’t this a bit like getting on your school’s P.A. system and calling the principal a buttface? 1. Break stuff
If the cops ever catch you shattering windows somewhere, just tell ’em you’re “breaking glass for education.” Apparently that is a thing people do, at least if you’re a pro golfer or a college mascot. This happened at the Farmers Insurance Open and it’s the only thing Camilo Villegas has won in years.