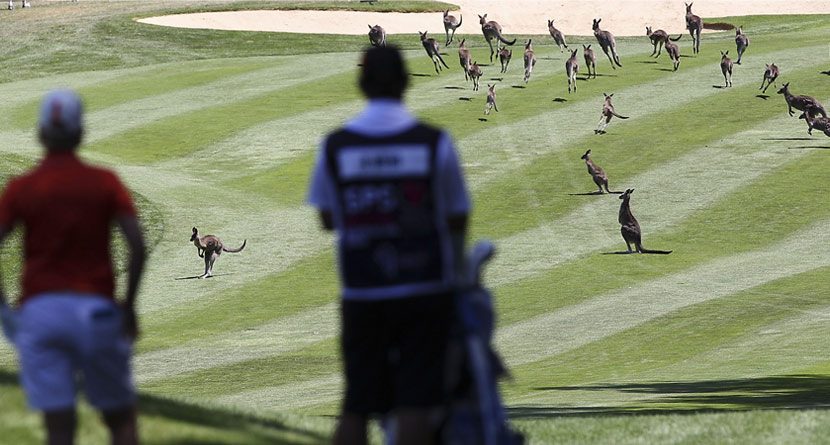 A pair of enterprising businessmen in Michigan are combining their ventures to form a new winter activity: a “3-D archery” experience on a 9-hole golf course. The archery challenge will include traditional targets plus imitation deer, rabbit and that crazy stunt where you shoot an apple off your kid’s head. Golf Magazine this week released a profile of golf announcer David Feherty, a piece that both glorified the man and spoke to his erratic lifestyle. Among the revelations: Feherty survives each day on a wide regimen of drugs to battle bipolar disorder and relies on his wife and assistants to get him from place to place. Honestly, when a guy adds this much to golf, I don’t care what it takes. Be well, David. The PGA Tour heads to middle-of-nowhere Arizona this week for the WGC-Accenture Match Play, a tournament that will boast the strongest field so far this year. Players will include 64 of the top 66 golfers in the world—of the top pros, only Brandt Snedeker (injury) and Phil Mickelson (ski trip) will be absent. Fun fact: someone named “Bernd Weisberger” is No. 67 in the world and is an alternate at this point. Maybe next year, Bernd.

6. Shrimp on the barbie
A gang of kangaroos temporarily stopped play at the Women’s Australian Open last week, narrowly beating “boomerang attack” as the most stereotypical Australian thing that could have happened. I suppose it could have been more dangerous, though: check out this bee attack from the 2008 Zurich Classic. Michelle Obama is going to find her husband absolutely insufferable this week. Our golf-nerd-in-chief spent a guys’ weekend in Florida that included private coaching from Butch Harmon and 18 holes with Tiger Woods.

“I’m never washing this golf glove again,” I imagine the POTUS saying to the First Lady. “Can I put a Tiger poster on our wall?” Move over Bobby Jones, because there’s a new amateur in town and she’s absurdly good. The 15-year-old Lydia Ko has already won three pro events, including last year’s Canadian Open on the LPGA Tour. She finished third at last week’s Women’s Australian Open, where she fired an opening round 63. Maybe I’ll be good at something one day…

3. A little story about Luke Donald As a member of the golf media, I’m obligated to mention Luke Donald’s size whenever writing about him, so here goes: Reports this week reveal that the tiny Luke Donald has struck up a friendship with the much larger Michael Jordan. The two often play money matches in Jupiter, Fla., where Donald routinely beats Jordan even though the wee Englishman plays with child-sized clubs.

“He’s good for the mind,” the slight Donald added timidly. “He’s been making sure I’m ready mentally [for competition].” Luke Donald is a small man.

2. Gorge grooves
I am a sucker for any scene where people walk in slow motion toward the camera, so imagine my delight when I saw this new commercial from Ping. They need to make more ads with Lee Westwood immediately.

1. Golfers are nuts
This video is called “5 Golf Balls to the Nuts.” All I can say is that this guy is lucky someone with real putting skills wasn’t involved, or his voice would be permanently raised a few octaves.