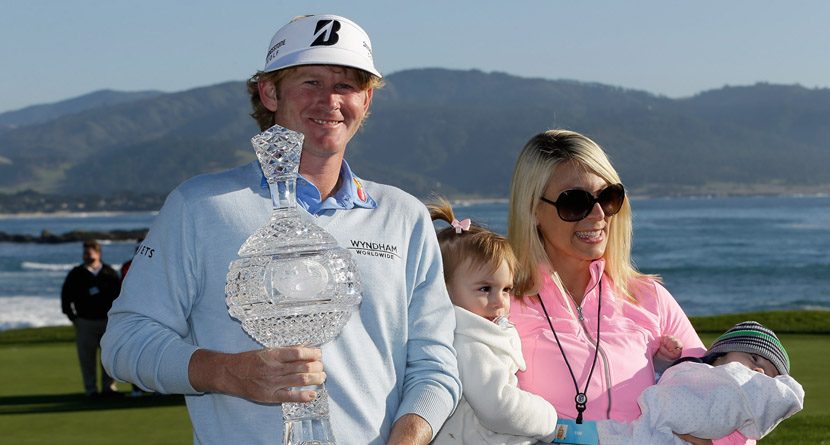 9. Bucket list
At some points during the AT&T Pebble Beach National Pro-Am, it looked like a bunch of Gilligans had taken over the course. TaylorMade had its staffers wear bright yellow bucket hats to promote their Rocketbladez “One Bucket Challenge.” Looking at Dustin Johnson in this hat, somehow I think this won’t become a trend. 8. Let the big dog eat
The Wall Street Journal this week documented just how dominant TaylorMade has become in the golf equipment world: now owning 47 percent of the metalwood market and 25 percent of the iron market. The most interesting tidbit, though, was the revelation that TaylorMade wasn’t sure its white R11 drivers would be successful—they had a “contingency plan” to roll out a black version within six months. Personally, I am still waiting for an upgrade to the Burner Bubble.

7. Old-timey trick shots
I know you’ve been dying to see some trick shots from the 1930s—thankfully this video popped up on YouTube this week. Check out the legs on those dames!

6. Have a nice trip
See you next fall, Phil Mickelson! The left-hander went looking for his ball on the 18th at Pebble Beach and fell flat on his ass.

5. A win for Mayberry
It looks like Opie might make a run at the world No. 1 ranking. With his victory at Pebble Beach, Ron Howard-lookalike Brandt Snedeker jumped to fourth in the world—only Rory, Tiger and Luke Donald are ranked higher. Snedeker must feel happy enough to go whistling down by the fishing hole.

4. Not Top 10
Schadenfreude and Monterey don’t usually go hand in hand, but they did on the Internet this weekend because of the Clambake. ESPN anchor Chris Berman put the “am” in pro-am with these painful attempts at removing his ball from a bunker at Pebble Beach. He was on that beach so long, he should’ve bought a timeshare.

3. Friends with benefits
Apparently Tiger Woods, named America’s third-most disliked athlete this week, is trying to make sure everyone knows he’s a nice guy. After skier Lindsey Vonn wrecked her knee in a brutal accident, Tiger loaned her his private jet to get home. Tiger, I don’t know if I like you either. Maybe send that jet my way and I’ll change my mind?

2. 19th century style
Hey, is that Bill Murray or 21st President of the United States Chester Alan Arthur? It was hard to tell as the actor showed up at Pebble Beach rocking some facial hair that was straight out of the 1880s. 1. Ridin’ dirty
Let’s say you create a street-legal golf cart with turn signals, headlights and a super charged engine. Now let’s say there’s a whole fleet of them, driven entirely by senior citizens. Probably something you should get insurance on, right? Not if you’re the golf cart-crazy residents of The Villages in Florida, who will fight any attempt to insure their unregulated speed machines.