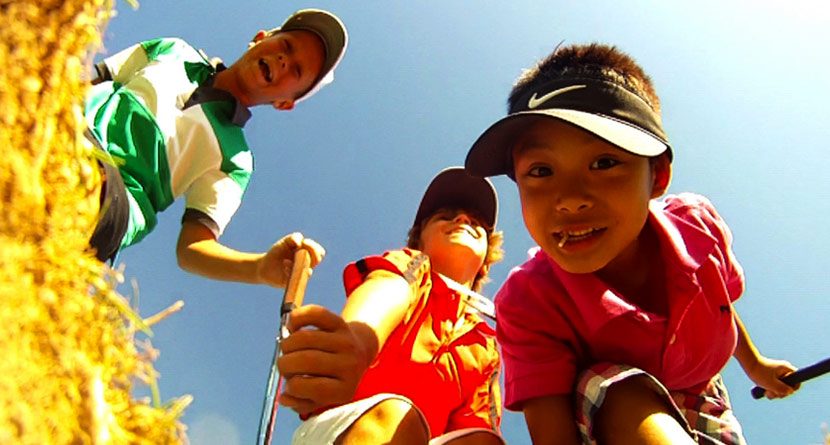 Anyone who’s played the game of golf at a young age will remember how they felt the first time they hit a pure tee shot or made their first par putt. Golf was truly a game back then, resembling something closer to a stroll through the neighborhood park than a competition against our peers.

In director Josh Greenbaum’s new feature film “The Short Game,” however, children – some of which are younger than 7 years old – are all about beating the diapers off their opponents. The movie, which also features executive producers Justin Timberlake and Jessica Biel, hits theaters Sept. 20.

Shot as a documentary reminiscent of “Spellbound” or HBO’s “Hard Knocks,” the film chronicles the trials and tribulations young golfers face every year at the World Championships of Junior Golf. A selection of top junior players (including Allan Kournikova, kid brother of tennis star Anna) are highlighted in the film as they prepare and compete in the annual tournament, held at Pinehurst last year.

As you can tell by the film’s trailer, “Short Game” is as much a story about the junior golfers as it is about their parents. Real-life family challenges and life lessons abound in the film, which touches on elements of fair play, overcoming adversity and remembering that, at the end of the day, golf is still the greatest game in the world.

A number of golf legends also make an appearance in the film, including Gary Player, Annika Sorenstam, Chi-Chi Rodriguez and Jack Nicklaus. It is this added element of golf greatness that balances the film for those of us who do not have children competing at the Junior Worlds.

“The Short Game” debuted at the SXSW Film Festival earlier this year and is directed by Greenbaum and produced by Rafael Marmor and Christopher Leggett. More than 14 different camera men helped shoot the film, lending a unique perspective on the numerous young players profiled throughout the film’s 99 minutes.

Other Hot Links:
– What’s Hot: The Beach is in The Building
– Which Golfer Could Use $10 Million the Most?
– Update: Kate Upton Gives Arnold Palmer a Lesson