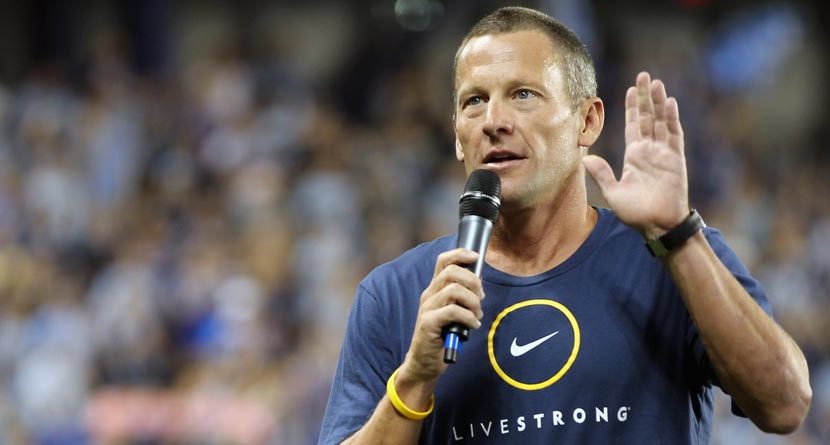 Lance Armstrong hasn’t exactly made amends with fans for his doping scandal during his time as a cyclist. It’s not going to be easy for Armstrong to change the public’s perception of his character, but discussing his integrity in golf is a good starting point, I suppose.

In a piece for Golf Digest, Armstrong discusses the game and whether or not he’d cheat on the course.

Due to the fact that he’s no longer racing competitively, he plays golf. A lot of golf. And that’s exactly how he got his handicap down to a 10.

“My handicap is 10, and it’s taken me serious effort to get there,” Armstrong said. “Last year I played 250 rounds. I’ll get there again this year.” But he doesn’t just play for fun. He plays for big money.

“Once you get used to playing for big money, a $10 nassau seems boring, and playing for nothing seems pointless. Whatever you’re playing for, it’s got to be enough that it hurts a little when you lose.”

Coming from a guy whose net worth was $125 million in 2012, playing for an amount labeled as “enough that it hurts” means he’s not playing for the penny in your pocket.

As far as cheating on the course goes, his answer might surprise you.

“You might consider me the last guy to have anything to say about cheating, but golf is different,” Armstrong said. “I love adhering to a code of honor that we in cycling didn’t have. If I moved my ball in the rough and got caught, I wouldn’t just regret it, I’d be heartbroken forever. When I think about reform in cycling, I think about golf.”

Those are some strong words. To say he’d be “heartbroken forever” is a bold statement, to say the least. To be honest, I can’t say I’d even feel that way had I got caught using the ol’ footwedge. Not that I’ve ever used it or anything…

The moral of the story points to how strong the honor system is in golf. For someone who’s had seven Tour de France titles vacated to say he will never cheat while playing golf says a lot about the game. It’s truly a game of integrity and nothing should ever change that.