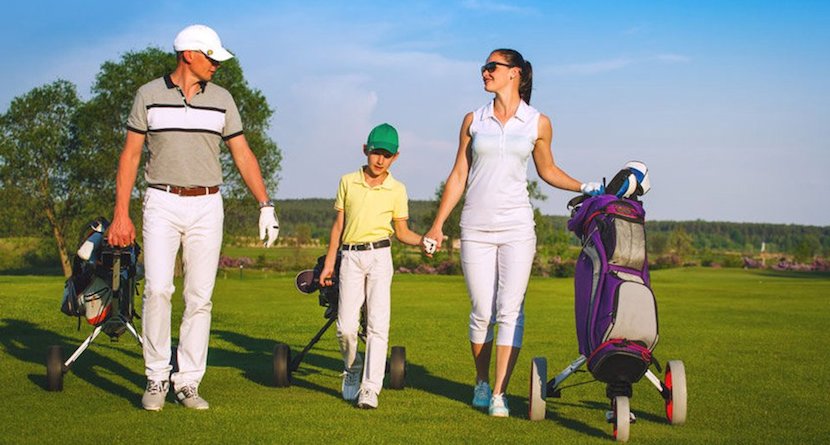 The connection between golf participation and family is a constant. In literally hundreds of research studies that I have conducted, we consistently see that those with the deepest emotional connection to golf and the longest participation tenure, were introduced to the game by some family member; typically a parent. It’s perhaps ironic that in some of the more recent insights that we have derived about the future of golf, we are turning to a broader definition of family time, as the most powerful driver of forging an enduring connection.

Beginning with the most intuitive observation, countless focus groups, depth interviews and surveys have raised a window to the fact that four plus hours communing with nature, tranquility and a game that is superficially so simple, but inherently so complex, fosters meaningful and transcendent relationships. From an intimately personal vantage point, I owe the genesis of my own journey in golf to my father. Beginning as spectators at multiple U.S. Opens and Westchester Classics, and evolving to regular rounds together at home, on vacation and with many of his business associates, the game became both inspirational and aspirational. As our research shows beyond golf, when a pastime can become that facilitator of enduring memories, it becomes a powerful and impenetrable link between past and present.

The parent child relationship’s180 degree arc has been vividly evident in what has subsequently transpired between my father and I. As an impressionable teen and young man, I revered and aspired to replicate dad’s various excursions to the world’s most celebrated tournaments and courses. The infectious allure of the game and its impact on my father’s own self actualization and bridge between career and leisure time further fueled my personal passion to build upon it. Quite simply, I was inspired by my dad’s connection with golf, and his open sharing of that, facilitated my own opportunity and desire to expand upon it as the game became both my vocation and avocation.

Now as dad battles with life threatening health issues, his own crowning accomplishment of shooting his age just a couple of short years ago seem unfairly distant. It is my golf stories and souvenirs that comprise and sustain our shared passion as he continues along a jagged, lengthy and difficult path that, through the grace of God, may put us both on a tee box together again, at some future point. Within our own personal odyssey lies insight representative of what our research has always shown. Golf truly is a game of a lifetime that can link past to present and even the future as my own son is now discovering the same bridge that golf can build between parent and child.

Moving from the deeply personal, to the more pervasive is not a difficult leap for those that can identify with my journey. But stepping back into the role of researcher, it’s appropriate to reflect further on other ways in which family can and should remain an important differentiator that can sustain the game of golf. Beyond the interpersonal connections, the bonding time, the escape from the outside world and camaraderie that golf facilitates, our work shows a continued reverence for The Rules, the personal values, decorum and self discipline that golf can foster. Anyone familiar with The First Tee program, recognizes that so many of its core principles hinge on the game’s ability to teach life lessons that go beyond what one does on the golf course. In research that we’ve conducted in support of the program, it is vividly evident how The First Tee plays a critical surrogate role for traditional family structures, often not present for the program’s participants.

Other recent research and observation bare evidence that definitions of family have been transformed. While I feel personally blessed to have a father that spent time with me on a golf course, today’s realities make that less common for others, and therein lies both challenge and opportunity for the golf industry to build off of its foundational interpersonal qualities and adapt to today’s societal structures. Even among situations akin to what has historically been the traditional family unit, we see that our 24-7 digitally stimulated society often balks at or finds itself inhibited from investing four hours on a golf course. Thus, we see golf’s push towards alternative access points, to nine hole rounds, gamified practice ranges and pay-by-the hole options as surrogates to maintain exposure to golf at junctures in one’s life cycle, where traditional rounds are less accessible. At private clubs we see a growing trend towards offering expanded family programming that can make the golf facility more of an extension of home life, while recognizing that the 18-hole round may no longer be the amenity of primary importance. Similarly at public access venues, parent-child programs have become more pervasive. The success of the PGA of America’s Junior League program is among so many other elements, a facilitator for families to rally around the kids’ extra-curricular activities.

The golf experience can be many different things to different people, but clearly one of its most powerful and persistent drivers will remain its ability to bring the family unit, however it is defined, together. The more we can capitalize on this as an industry, the more likely we are to sustain the vitality of the game.