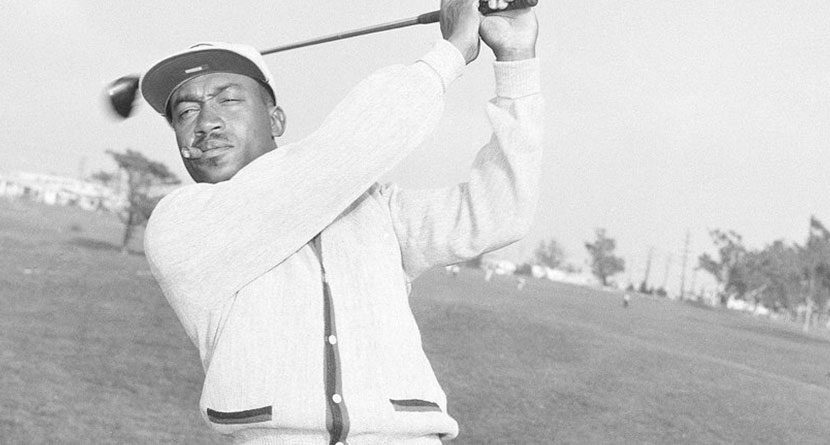 Charlie Sifford is widely regarded as one of the most influential and pioneering forces in modern professional golf. Sifford broke down color barriers and was the Jackie Robinson of golf. Tiger Woods considered Sifford such an important part of his life and career that he often called and referred to Sifford as “grandpa.”

All of that makes this latest saga that much more disheartening. Sifford’s youngest son, Craig, was sentenced earlier this week in Cleveland for pilfering his father’s estate. Yahoo.com had the story.

The son and former daughter-in-law of the first African-American golfer on the PGA Tour have been sentenced to prison for stealing more than $1 million belonging to the legend of the game, Charles Sifford, Ohio officials said on Friday.


Craig Sifford, Charles Sifford’s son, was sentenced on Thursday to three years in prison and former daughter-in-law Sandra Sifford has been sentenced to 2-1/2 years in prison, the Ohio attorney general’s office said in a statement.

Charles Sifford, who died in February 2015 in Cleveland at the age of 92, was the first African-American to compete in Professional Golfers’ Assocation-sanctioned events in 1961. He was often compared to Jackie Robinson, who broke professional baseball’s color barrier.

An investigation of the pair was launched while Sifford was still alive. The two spent money meant for Charles Sifford’s care on items such as travel, dining, clothes, jewelry and landscaping between 2010 and 2013, the office said.

“Charlie Sifford trusted these family members while they helped themselves to their inheritance,” said Assistant Cuyahoga County Prosecutor Paul Soucie.”That man, that American, that legendary golfer, deserved better than that.”