Lighting the Fuse: The 9 Greatest Golf Arguments of All Time 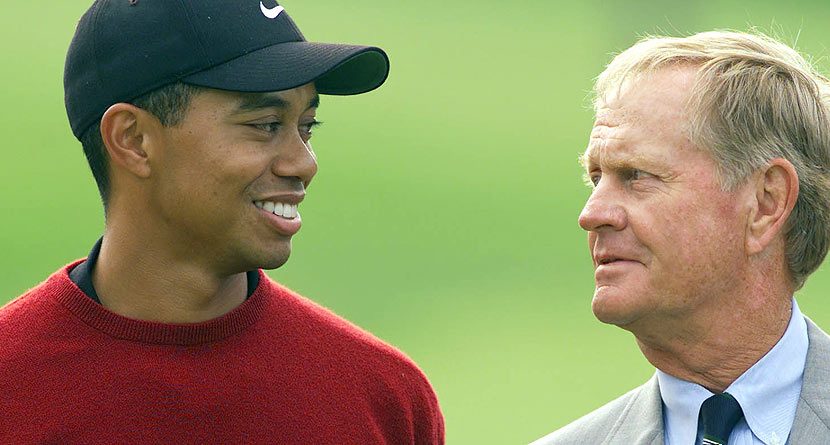 In preparation for this week’s Fourth of July festivities, I’ve decided to create some fireworks of my own by tackling nine of the greatest golf arguments of all time.

It should go without saying that the opinions expressed here are my own and do not reflect those of the Back9Network. So when you finally realize that I am correct in each case, be sure to send the accolades and movie deals my way. Have your people call mine. We’ll do lunch.

Tiger vs. Jack: Who is Better?

Let’s start this show off with a doosie. This discussion always ends up focusing on the number of majors won between the two greatest golfers of all time; Jack has 18, Tiger has 14. Frankly, I am sick of hearing about “major victory” totals and would prefer to talk about each player’s full body of work.

While Tiger has the higher number of wins on the PGA Tour (78 to Jack’s 73), the Golden Bear has more total victories as a professional (115 to Tiger’s 105). Furthermore, Nicklaus finished in the top-10 in every major for 24 straight seasons, spanning between 1960 to 1983. Hell, between the years 1960 to 1980, Nicklaus never finished lower than sixth in any British Open. To top it all off, he also accumulated 19 runner-up finishes in a major during his career.

Is Golf a Sport or a Game?

I don’t think there is a question you could ask me that would piss me off more than this gem. Well, maybe if you asked me “Is Tiger Back?” It’s a coin-flip.

Golf is a sport. There’s no debating that. I don’t even understand the counterargument where people suggest golf is more a series of skilled movements than an athletic talent. Has golf somehow become a bar-game like throwing darts or bean bags?

Couldn’t the same be said for tall guys throwing a ball into a basket or someone trying to hit a round ball with a rounded bat? Perhaps if golf required its athletes to run bases, inject steroids or slam into one another it would be more widely “accepted” as a sport. Whatever.

I don’t know about “better”, but I would say “more pure”.

There isn’t anything more entertaining than watching the greatest golfers in the world pulling every shot out of their bag on a golf course that looks more like a cornfield on a day with 30 MPH winds. Players can’t just walk up to the tee and hit big sweeping draws on every shot. There are just so many more variables to consider when playing in Scotland or England.

Links golf is how the game’s founding fathers played it, so it will always be my favorite type of golf to watch. These two courses go back and forth on the Top 100 Courses list on what seems like an annual basis. Full disclosure: I’ve never been to either, so my comments are based more on what I’ve seen on TV and what I’ve heard from players.

When it comes to course difficulty, Pinehurst might get the edge over Pebble because course superintendants simply have more options (rough length, pin placements, etc.). But when it comes to aesthetics and historical significance, Pebble Beach is still the king in my book.

Can You Get Exercise Playing Golf?

The other day I tracked the number of calories I burned playing golf while also using a riding golf cart. After 18 holes, I still managed to shred over 900 calories over the course of four hours. Granted, that’s not running-a-marathon quality, but that number can only go up if I decide to walk my next round.

You’d have to actually try to not get exercise while playing golf. There’s no other way to put it.

What is the “Real” Fourth Major on the PGA Tour? (PGA or Players)

The Players Championship has long been seen as the unofficial “fifth major” since the biggest and brightest golfers compete in it every year.  Many fans believe the Players is actually a “better” tournament than the PGA Championship.

While the Sawgrass event is certainly a favorite of mine, the Players simply does not stand up to the PGA Championship in one critical way: the year’s final major is the only tournament the PGA throws every season. Much like the U.S. Open being open to amateur players across the country, the PGA Championship provides an opportunity for club professionals to play with the big boys. The Players simply cannot compete with that.

Greatest Golf Movie of All Time: Caddyshack or Tin Cup? Remember when I said earlier that the “Is Golf a Sport” question pissed me off? This one is a close second.

I’m going to make this really simple for everyone, once and for all: anchored putting is not cheating… at least until 2016 (when the ban goes into effect on the PGA Tour). Until that time, Tour players can jam that putter into any part of their body all they wish because it is not breaking a rule of any kind. After 2016, at least on the pro circuit, anchoring your flatstick to your body is illegal and anyone caught doing it can then and only then be classified as a cheater.

Should there be separate rules for Professionals and Amateurs?

Yes, because golf is already different for the two groups now.

The biggest point opponents to this question dwell on is some misconception that a weekend hack can play the same equipment and by the same rules as their favorite players on TV. That simply is not true.

The Average Joe cannot walk into a golf shop and buy the same driver Bubba Watson or Tiger Woods plays every week. They can buy a club very similar to the ones the pros use, but it isn’t exactly the same. Pros use prototype equipment most of the time, designed specifically for their needs.

As far as the Rules of Golf go, I will admit that a regular golfer can play “pro rules” every time they tee it up. However, when was the last time you sliced a drive into the trees, walked up to find your ball OB and then walk all the way back to the tee to hit another drive? Chances are you just took a drop and a penalty stroke instead. That’s against the rules, yet everybody does it. That’s just one example.

Amateur golfers haven’t played the same game as the pros for decades. So why are we so against bifurcation of the rules?

Other Hot Links:
– The World’s Largest Golf Cart
– 9 Best Winner-Take-All Moments In Sports
– Much Has Changed Since Tiger Woods Last Won A Major