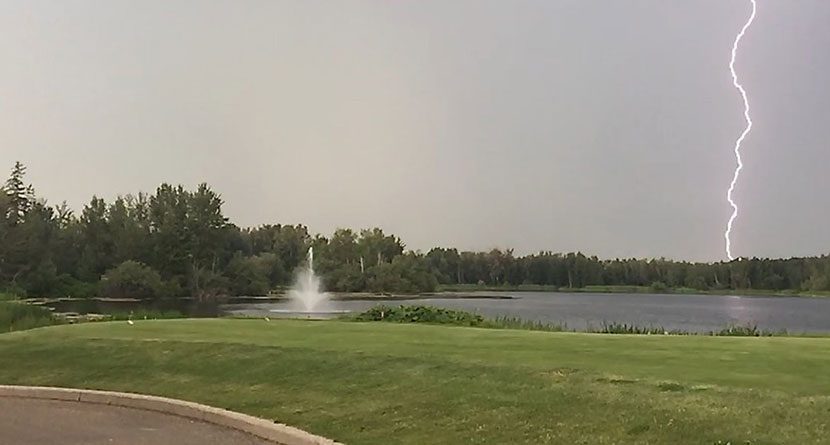 Part of the allure of golf is that unlike basketball, baseball, soccer or tennis, the playing field is different from day to day and hole to hole. The volatility that playing outdoors brings into the mix will be on full display this week in Scotland. Bizarre weather isn’t only a United Kingdom phenomenon, though. Earlier this week in Iowa, a line of storms left it’s mark on a local golf course.

A line of thunderstorms that pushed through Iowa on Monday night produced a lightning bolt that left its mark on a golf course practice green in Des Moines.


Evidence of the strike on the green appeared in the form of tentacles of now darker grass spreading away in all directions from where the lightning strike occurred near the cup and pin. This was illustrated by a photo sent in a tweet by Rick Tegtmeier, the Director of Grounds at the Des Moines Golf and Country Club.

Tegtmeier said on his Twitter account that the strike even melted the cup, giving an indication of the brief, but intense heat that the bolt generated.

@golfsuper1992 I don’t think it will recover. The cup was melted so there was a lot of intense heat.

Pretty cool, but this isn’t the first time this has happened. Anna Garcia snapped a picture at Weeks Park Golf Club in Wichita Falls, Texas, earlier this spring of a similar lightning strike.