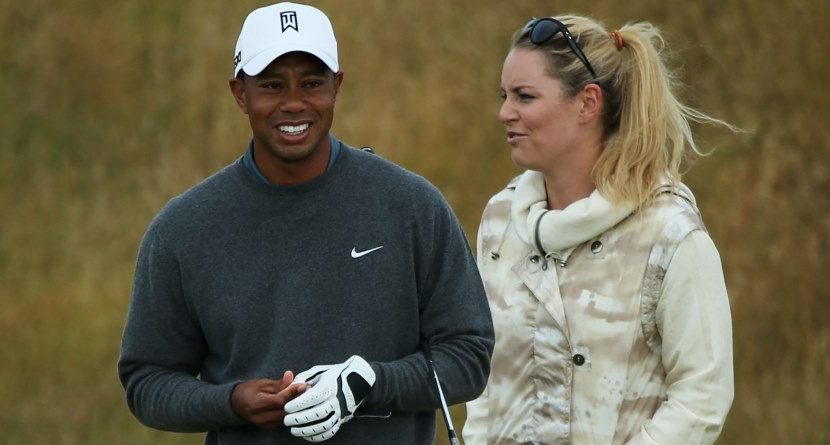 The sensitive topic of marriage came up during a recent Vogue Magazine interview with skiing superstar Lindsey Vonn, who’s also Tiger Woods‘ girlfriend. Sensitive because the two are both world-famous athletes who have endured painful and public divorces.

Vonn stated that her first marriage, to Thomas Vonn, her former coach, didn’t work because there was too much business involved.

“I think there needs to be a certain kind of understanding because it’s very hard for me to relate to someone who doesn’t do sports at a high level,” she said. “That part is necessary. But to have business in the relationship is very difficult. It definitely did not work for me, and I would not recommend it.”

Then the kicker: “I would also not recommend getting married!”

When asked if she’ll ever get married again, Vonn said, “No, thanks! I am definitely not getting married. To anyone.”

However, let’s be clear: That is not to say she’s not happy with Woods. It’s obvious she is, and he’s happy with her.

“We immediately clicked, you know?” Vonn said about Woods. “It was just one of those things… We talked a lot, corresponded a lot, and he was a good friend who was always there. And then it became more.”

The relationship may have a lot to do with Woods’ return to No. 1 in the world golf rankings, which came after his victory at the Arnold Palmer Invitational in March, his third win in five events. And his contentment with the relationship is a large reason why Vonn was trailing him Monday at Muirfield as he practiced for the Open Championship. Back in the Vogue article, Vonn admitted to nerves when watching Woods play. “These are acrylics,” she said about her fingernails. “I bite my nails, so this is the only way for me to control that. Especially now, when Tiger is playing, I get really nervous. I’m like, if I don’t put these on, my whole hand is going to be gone!”

And she playfully complains about the time she must put in to support his career. “I’m lucky to see one shot a hole! When he comes to watch me ski, he’s just gonna be cold. But he’ll be able to see because of the Jumbotrons. Plus, my sport is over in a matter of minutes. His is a marathon that lasts forever. This round last weekend was over five hours! But I’m getting used to it.”

She may not want marriage, but it doesn’t sound like she’s leaving his side anytime soon.