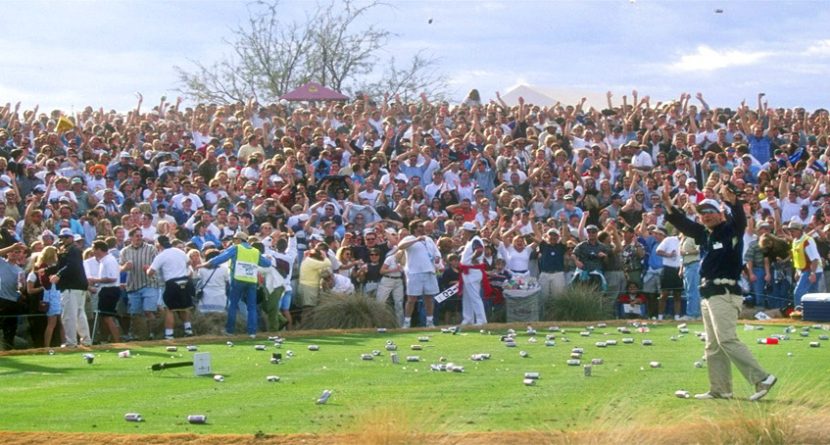 This week in Scottsdale, once again, truth and honesty are brought to the American sports scene.

In what may be the only true display of golf-icana outside the Ryder Cup, Scottsdale reigns supreme. Fans, semi-fans, the enhanced and the lifted will embark on a journey now known as the “greatest show on grass.” They have achieved something in Scottsdale that every community that hosts a golf tournament hopes to accomplish. They have turned a golf tournament into the social event of the year.

Whether it is New York City or Greensboro, N.C., every tournament committee in the country would love nothing more than for people to have their outfits picked out weeks in advance of their event.  Lest you think that those are golf fans in their 4-inch heels tromping down the cart path to the 16th hole, you are sadly mistaken. Some may not even see a shot and, if they do, it is because the guy hitting is either cute or wearing something that they like.

Don’t get me wrong. There will be more golf fans on the property on Saturday at the Waste Management than at any other event of the year — here or abroad. But they will be outnumbered like the English at Agincourt. (Too Dennis Miller?) The estimates will range around 200,000 people on the property on Saturday alone at TPC Scottsdale. That isn’t a golf tournament; it is the Daytona 500 in a polo… but louder. Keep in mind that very few events even approach that number for the week.

While other tournaments were trying to maintain a certain image a decade or so ago, tournament organizers, the Thunderbirds, were thinking outside the box. They created the most exciting hole in golf at the 16th. As the players walk through a tunnel that leads under the grandstand, they are greeted with a sign that reads, “Every player wants to be a rock star, every rock star wants to be a player. The stage is yours. Welcome to the 16th…” or something along those lines. I was always too nervous to read it on the way through because I was afraid that I would get booed.

And I did get booed a few times there for missing the green or making a bogey. And trust me. The reward for making birdie does not outweigh the humiliation of making bogey.

Other tournaments have seen the model and are following suit. The Travelers has become the party of the year in Hartford. Wyndham throws one heck of summer ending party in Greensboro. Wells Fargo is like adult spring break in Charlotte. The list doesn’t stop there. Even The Players has embraced the raucousness that has now become the 17th hole.

The Honda Classic, where Tiger and Rory dueled in South Florida in 2012, is offering babysitting services and a kid friendly area so that parents can escape for a drink and a bit of golf.

But the gold standard is the party in Scottsdale. There is nothing like it. A friend of mine that runs a casino in Vegas is upset that he will miss it because he has to prepare for the influx of revelers for the Super Bowl, a staple on the Vegas landscape.

There are certainly those who have felt all along like Scottsdale was getting out of hand. And if you still have a closet full of persimmon drivers and remember three-wheeled golf carts, you may be right. But that is the beauty of Scottsdale and the Waste Management. Real golf fans can follow along on the front nine and be left in relative tranquility to enjoy their favorite players. They can even get a spot to stand around the 18th green.

In fairness, they don’t have a prayer of seeing a shot on 16. You either have to get there early or have on a pair of really high heels. The heels won’t help you see over anyone but they might get up the steps and into a chalet where the drinks are free and the party doesn’t stop until the last group passes.

Is it right? I don’t really know. Maybe not. But it is honest and loud and fun. The players come and they love it, even though they feel mostly left out.  You can’t spend your evenings at the Bird’s Nest and contend at the Waste Management. At least I have never seen anyone there that was in contention.  For the record, I never made the cut in Scottsdale. You could say that the course didn’t suit my eye. But to be honest my eye was rarely on the course.

This week breaks all rules of tradition and a few of good taste. It is a spectacle on spikes…or spiked heels. But it is good for the game in a way that no other event can come close to claiming. Plenty of guys in suits were in Orlando last week talking about growing the game and bringing the game to more people.  They have been doing that for years in Scottsdale, and, this week, the party will resume in earnest. This is not your father’s Phoenix Open. But I have a sneaking suspicion that things haven’t changed all that much since the good old days…but fashion certainly has and the golf world is all the better for it.