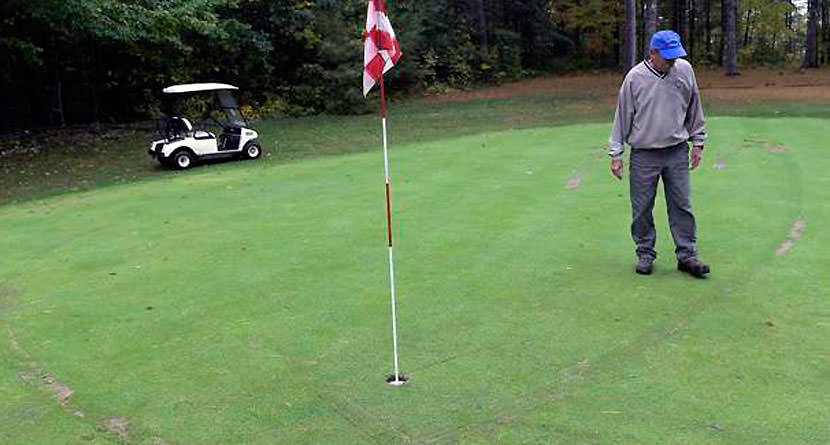 A Maine golf course was torn up earlier this month by vandals and those responsible are being investigated for committing a hate crime, according to CentralMaine.com.

Cobbossee Colony Golf Course was the victim of vandalism earlier this month, which left several greens affected and thousands of dollars in damage.

Vandalism at a Maine golf course is being investigated as a hate crime. https://t.co/yg5POPL8pm pic.twitter.com/YKH5EFIAmZ

Authorities are investigating vandalism at a Monmouth golf course as a possible hate crime after a swastika was found carved into the green on the course’s opening hole.

Bill Sylvester, who owns Cobbossee Colony Golf Course on Cobbossee Road, reported to police Monday morning that someone had driven a golf cart around the course and onto several greens. The large swastika was found near the hole on the first green, several hundred yards from the clubhouse.

“This is a business that thrives on having a beautiful piece of property,” Monmouth Police Department Patrolman Michael Pershall said. “It’s pretty sad.”

Pershall said the vandalism, which is being investigated as felony criminal mischief, likely occurred sometime between 9:30 p.m. Sunday and 4 a.m. Monday. He estimates the damage to the course to be between $2,000 and $3,000, not including any loss of business to the course.

There was a small American flag found at the scene near the swastika that probably fell off the golf cart, which did not belong to the golf course, Pershall said.

His investigation has turned up at least one suspect, but he said he was unable to link the evidence found at the scene to the suspect. There is no evidence that alcohol was involved.

“This appears to have been teenagers who have bothered the tranquility of the neighborhood,” the patrolman said. “I can’t make a definitive match, and I need that to bring a valid case.”

The case will be turned over to the Attorney General’s office as a potential hate crime because of the presence of the swastika. The Sylvester family isn’t Jewish, Bill Sylvester said, and he said he has no idea why someone would draw that on the green.

“It’s just insult to injury,” Bill Sylvester said. “There’s no place anywhere for something like that.”