Man On A Mission: How I Ate My Way Through Augusta 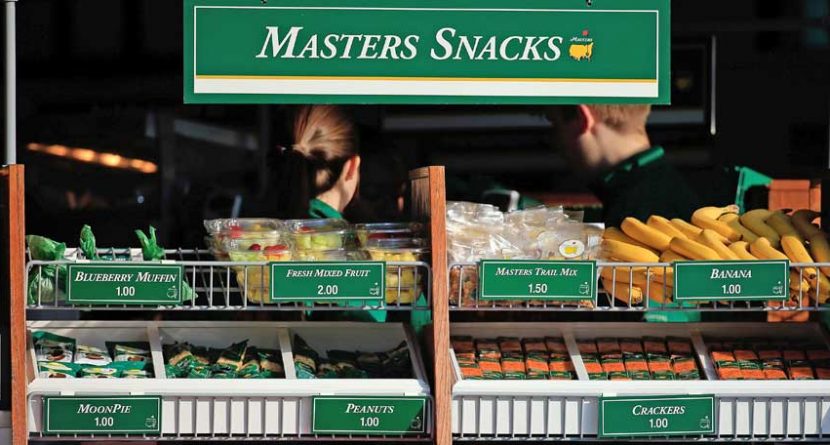 Some people are blessed with really great jobs and I count my self among them. This week, I’m on assignment in Augusta to bring you what you want to know, like where to eat, how the food is at Augusta National and what Back9Network is up to at the home of the Masters. So here’s a glimpse into my Wednesday at the Masters:

6:30 a.m. – I woke up and got ready. Normally I’d eat breakfast but not this morning. Today, I’m on a mission. I’ve been ordered by my boss to eat one of everything on the menu at Augusta National. Being the member of the staff with the biggest appetite and a stomach made of steel, I was the natural choice.

As someone who loves golf and enjoys chicken biscuits and southern cuisine more than anyone probably should, this is how I felt waking up:

7:15 – Arrive and park at Augusta National. I weave my way through the droves of patrons with the deft precision of an NFL running back, finding a hole and breaking free, making for the concession stands before they fill up so I can begin my adventure. Since it’s so early, I’ll be waiting on the famous pimento cheese sandwich and going with a chicken biscuit, a sausage biscuit and a Coke.

7:45 – After successfully downing two full biscuits and my Coke, I now feel full and ready to go. It’s still pretty early and there are only a couple players on the course. I decide to follow Bubba Watson, Webb Simpson and Brandt Snedeker around for a while and make some room for more food. On my walk down the 10th fairway, I take the time to stop where Watson hit his miracle hooking wedge to set up his win in 2012 and take a picture. Like most things in Augusta, I’m really glad I did. It’s impossible to fully appreciate the aesthetic without seeing it first hand.

8:25 – This time, I opt for the ham and cheese on rye, the classic chicken sandwich and another glass of Coke, otherwise known as the “nectar of the gods.” The ham and cheese on rye is despicable. Perhaps it’s because I’m not a big fan of mustard, but I’m inclined to believe it was the Elmers Glue-type consistency of the mustard that really made this sandwich (which I only got halfway through) somewhere on the enjoyability scale between going to the dentist and chewing on a stick your dog brought into the house. The chicken sandwich was cold and disappointing. Again, I only ate half of it.

8:35 – I feel guilty for the first time as I throw two half-sandwiches in the trash. An older woman gives me the stink eye, clearly judging me. If only she had known just an hour and a half ago that I’d downed two big biscuit sandwiches. I imagine Lee Trevino shaking his head at me somewhere close by.

9:15 – I’ve made my way through Amen Corner and down toward the Sarazen Bridge for a picture. Having been to the Masters before in 2012 and only seeing tournament rounds, I highly recommend that, as a first-timer, you make it a priority to go to a practice round and bring a camera. For most people, getting on the grounds is a once-in-a-lifetime opportunity and I’m sure you’ll want pics. I’ll  have plenty to show off to friends when I get home… if my diet this week doesn’t kill me.

9:37 – Despite having eaten what seems like moments ago, it’s time to knock another item off the menu. Normally, I’d space this out over the course of an entire afternoon, replete with naps in shady grandstands and normal intervals of time between meals. But today I have not that luxury. I have a busy schedule in the afternoon where I’ll be trying to meet John Daly and take pictures of pretty girls. Woe is me.

(Obviously, this picture was taken after meeting John Daly.)

9:55 – Sitting behind the grandstand at 15, I plow through a Masters club sandwich and chase that with a beer. I’ve now collected three souvenir cups and, honestly, am very excited about that. Through shady deals and bold-face theft, my collection of 10 cups from 2012 (relax, those were acquired over two days; don’t judge me) has dwindled to just three. Adding as many 2014 cups to my collection of “fine china” has now become a personal side goal for the day.

10:10 – Ready for a nap, I decide to hang out at 16 for a little while and watch guys try and skip shots across the water. From my vantage point in front of the sixth tee, I can’t tell who’s hitting, but I can see the shots, the balls splashing on the water, and can tell how good or bad each effort is by the lively reactions from the crowd.

11:20 – Having walked around the grounds for an hour or so hoping to make more room for the last few items on the menu, I’ve realized that is an exercise in futility. I’m just going to have to force-feed myself the last couple items. I’ve decided it’s too late for me to try the egg salad sandwich, since I hate them anyway and doing so wouldn’t result well. It is time to try the famed Augusta National pimento cheese sandwich.

11:31 – This was the highlight of my morning. Usually, I’m not one to try things just because they’re hyped up, but I was excited for this. Despite feeling like your drunk uncle looks after Thanksgiving dinner, this is how it felt when the oozy goodness of the pimento cheese sandwich hit my lips for the first time:

OK, it wasn’t quite a “religious experience,” but damn was it good. And honestly, I had no regrets feeling like death afterwards. I don’t blame the pimento cheese sandwich. It’s not its fault it was consumed in the order that it was. Remaining objective was tough, but I have, and despite feeling like I was going to explode the whole time I was eating it, it was delectable and I can’t wait to eat it again.

12:10 p.m. – I’ve finally made my way back to the gift shop area. Luckily, the lines aren’t nearly as bad as I thought they’d be. I pick up two more Cokes and a BBQ sandwich to finish off my menu for the day. Standing in line, forcing down the final sandwich on my hit list, despite looking into the shaming eyes of those around me, I felt like a champion.

12:50 – The next couple hours were uneventful. I picked up all my Masters swag and headed home to write up some stuff. I got ready to go to a photo shoot with Back9Network girls Audrina Patridge, Katie Sundseth, Jenn Bosworth and Meghan Hardin. The shoot was a 3 p.m. in an undisclosed location with lots and lots of collector cars. 3:13 – Walking into this place is like a dream. I’ve always wanted to be a race car driver and the moment I laid eyes on the four Sprint Cup series cars and old Formula 1 machine on the floor, I forgot all about the pretty girls. OK, that’s, not true. The shoot was a major success. And at the end, I got to start Jeff Gordon’s No. 24 car. It scared the girls half to death but was still really cool. You can’t imagine how loud one of these things are in an enclosed space. At least now if my girlfriend ever claims I’m not listening to her, I can simply explain I’m half deaf.

5:45 – With the shoot over, it’s time to head out to dinner and then return to the house to do some production. Oddly enough, I finally feel hungry again and can’t wait for dinner. I had to wait for another day to meet John Daly, but that’s OK. There was plenty of fun (and food) crammed into one day in Augusta.