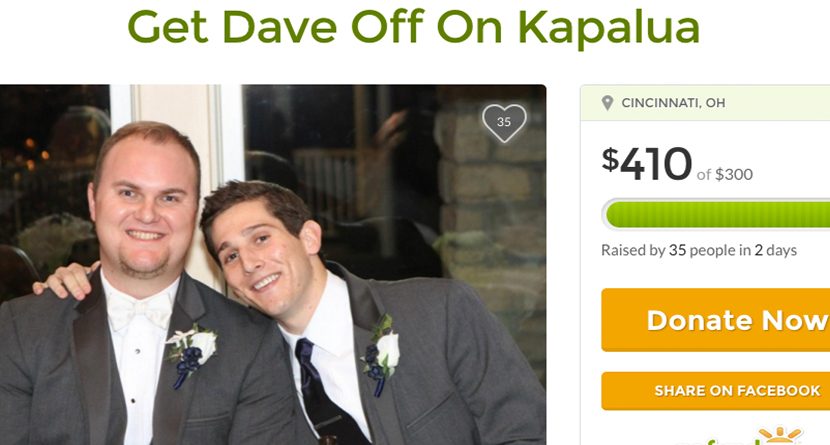 I got scooped on my own story.

I started a GoFundMe page for a buddy who wanted to play the Kapalua Plantation Course, home of the PGA Tour’s Hyundai Tournament of Champions, during a trip to Hawaii this summer with his wife. It’s now gone semi-viral. Here’s how it happened.

On Saturday night, some friends and I were at a couples shower when we retreated to the back deck to sit around on an unseasonably warm night in Cincinnati to enjoy a few drinks. As it does with my friends, especially when they’re around me, the topic turned to golf.

My friend Dave —  you may have read about him yesterday — also loves golf. He’s a former college pitcher and a pretty decent golfer himself, so when he mentioned going to Hawaii, the first question I had was, “are you going to play anywhere?”

Dave mentioned he would like to play Kapalua. His lovely wife, Alli (who’s getting railroaded because of this stupid joke), blew it off saying there’s no way a round of golf is worth $300. It was a throwaway statement, something every wife ever has dismissed without any real thought. Unluckily (or luckily as it turns out) for Dave and Alli, I was there to take this nonissue and blow it extremely out of proportion.

(Sidenote: To Alli’s credit, she’s pretty lenient when it comes to Dave’s golf; he plays a few times per week when the weather’s nice and few other times throughout the year whenever the sun breaks through the clouds. Give her a break, Internet.)

So, sitting around a table at 11 p.m. on Saturday night, I hopped on GoFundMe for the first time in my life. I started a page with a poorly-worded headline and a simple description.

My friend Dave wants to play Kapalua, so now he has a GoFundMe. Seriously. https://t.co/l4hRihsekB

What happened next was amazing. I wasn’t sure if Dave would even want me to keep up the page for five minutes after he saw I actually went through with creating it. In all honestly, I didn’t think it had more of a shelf life than five minutes, but the Internet happened.

Sunday came and went with $30 in the kitty — $5 from me to get it started and $25 from our other friend, Rob, the one in the picture with Dave — and we thought maybe a few of our friends or parents would see it, throw a few bones Dave’s way and he would get close enough to the full greens fee to get to play some golf on vacation.

Fast-forward to Monday morning and the thing blew up. GolfDigest.com, GolfChannel.com… it was all over place. All the while, Dave — who, it should be pointed out, has been an incredible sport with all this; the Internet is a mean place — was close to reaching this random goal he had nothing to do with.

The fine people at Golf at Kapalua have reached out and have offered some services and the golf internet world, whether well-meaning or just looking to get a dig in with their comments, have been overwhelmingly generous.

@Wrong_Fairway Wow! Good friends are few and far between! Earn your trip.. Lunch and #KapaluaGolf gear on us! #HelpDavePlayKapalua ⛳️

Two days later, Dave’s got enough donations to allow him to play a PGA Tour course and Alli — the real MVP — is going to ride along with him to document the day for me, our friends and the rest of the Internet.