Marathon Golf Is Not For The Faint Of Heart 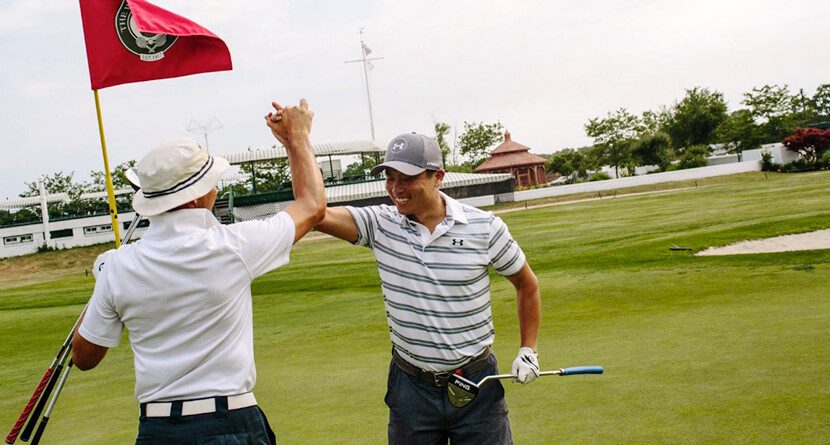 It wouldn’t be uncommon to hear someone in the grille room say that a round of golf is a marathon, not a sprint, but in marathon golf, the sport transforms into a combination of the two. With the Summer Solstice taking place on June 20, tales of marathon golfers playing an insane amount of golf in one day — usually for the benefit of a charity — are not uncommon.

Danie Steyn and Bill Bonn were two of those players participating in the Hundred Hole Hike.

They would walk nearly 45 miles from start to finish, the equivalent of almost two marathons, all while trying to hit the ball straight. Steyn, a 29-year-old Philadelphia golf instructor, would go through three pairs of shoes, four pairs of socks, three shirts, two Advils and a Chardonnay cocktail before knocking in the last, merciful putt for bogey at 6:46 p.m.

“That was brutal,” he said.

If you’ve ever played on a crowded public course on a weekend, you may be familiar with the concept of a daylong golf marathon. It’s commonly known as “18 holes.” But the endurance test that Steyn embarked on was something else entirely. His partner, a 41-year-old radiologist named Bill Boonn, logged 83,592 steps on his pedometer. The outing was part of a network of golf marathons called Hundred Hole Hike, in which people walk and play 100 or more holes in a day to raise money for a charity of their choice. For Steyn, that was the Junior League of Philadelphia. Boonn played for the Make-a-Wish Foundation.

The concept took root in 2011, when a Chicago banker named Jim Colton raised more than $110,000 by walking 155 holes in a day for a caddie who had been paralyzed in a ski accident. The following year, he started the charity that oversees the hikes. Now, they attract nearly 100 golfers per year. There have been hikes across the U.S. and a few in Canada, Scotland and Australia.

What makes marathon golf different is precisely what makes it effective, as a fundraising device.

“Do the math and 100 holes doesn’t even seem physically possible,” Colton said. “When you bring that up to someone, it’s a good conversation starter. You get sort of funny looks.”

The pair managed to get in 153 holes — the equivalent of 8.5 rounds of golf — in one day. That’s two professional golf tournaments and then an emergency nine holes because you haven’t had enough yet. And did we mention they did it all without the aid of a golf cart?

To learn more about the Hundred Hole Hike, check out their website.