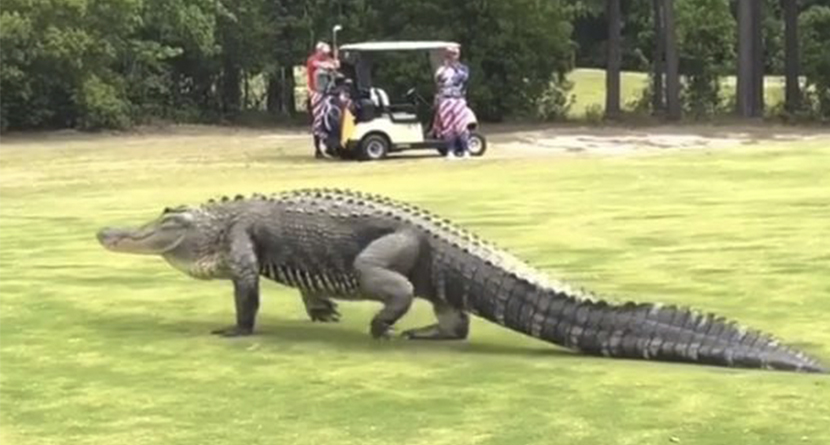 There isn’t much that can spook a couple of Marines on Parris Island, but late last week a monster on the golf course sure shook a group of military members.

According to the Island Packet, a group of Marines was playing a course on Parris Island, South Carolina when a giant gator made its way across the fairway. Gators are quite common on the golf course in South Carolina, but the sheer size of the one encountered surely made this experience stick out.

Gunnery Sgt. Michael Zimmer was playing golf with two retired Marine friends at the Marine Corps Recruit Depot Parris Island when they encountered the beast on the 17th fairway.

“All of them laying on the banks of the ponds,” Zimmer said in a text message to the Island Packer. “But this was the last one, enormous, and the only one moving.”

The Legends Golf Course on Parris Island does have a famous gator named “Fred”, but the one sighted is not believed to be it.

Gators have become commonplace on the PGA Tour in the last several weeks. At the RBC Heritage in Hilton Head, South Carolina, Tour Pro Luke Donald was startled by an alligator while walking up to his shot.

Just this past week at the Zurich Classic at the TPC Louisiana, an alligator refused to move out of the way of a shot from Talor Gooch. Officials tried to scurry the animal, only to have it chew on a rake in the bunker instead of moving. Gooch was given relief from the monster.

“I like my life. I like it with all my limbs. So I stay away from those things.”
– @TalorGooch

The video of the alligator walking up the course has exploded on Instagram with over 80,000 views over the weekend. If you do find an alligator on the course the best thing to do is give the reptile its space. What you don’t want to do is feed the gator food, which several tourists did last month in the area.