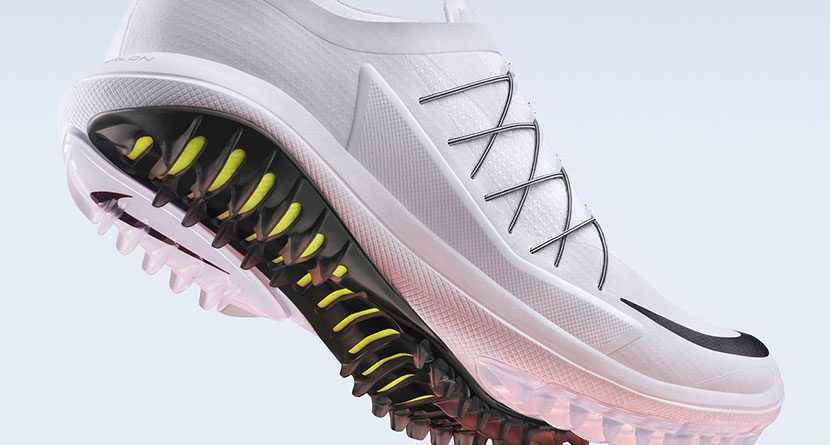 Rory McIlroy is going to debuting more than just a new driver and fairway wood at his first start of the 2016-17 PGA Tour season. The four-time major champion will be sporting a new shoe from Nike Golf that borrows some attributes from — of all things — a snowmobile.

Spikes no more! Check out the future of traction from @nikegolf #LCV ⛳️

The Nike Lunar Control Vapor will be on McIlroy’s feet this week in China when he tees it up for in the WGC-HSBC Champions and the story behind how Nike sold the spikeless shoe to McIlroy is pretty incredible.

From the Swoosh’s release statement:

In mid-August, Rory McIlroy and his performance team escaped to the Bahamas for five days of concentrated practice and training. McIlroy hit the range, the weight room and, of course, the links. The effort paid off: he ended the summer with a brace of wins — the Deutsche Bank Championship and the TOUR Championship — and claimed the 2016 FedExCup.

“For as long as I can remember, I’ve played golf in spiked footwear, and up until two years ago those spikes were metal,” McIlroy recalls. “Through its drive to innovate and bring the sport to new places, Nike has created a new traction system that provides me with a stable base to push off the ground and deliver the distance I need off the tee.”

Inspired by the tread on snowmobiles, the new traction system, which was first introduced in the Nike Flyknit Elite, decouples the medial heel and lateral forefoot area to help propel the athlete through the swing. The articulated channels also allow for better balance while keeping the golfer lower to the ground. A unique TPU tread features a protruding series of tooth-like tracks allowing for more points of contact for maximum traction that continuously engage with the ground as weight shifts from heel to toe.

The shoes will be available in both men’s and women’s sizes beginning on Nov. 22 on the Nike+ app and on Nike.com on Nov. 25.