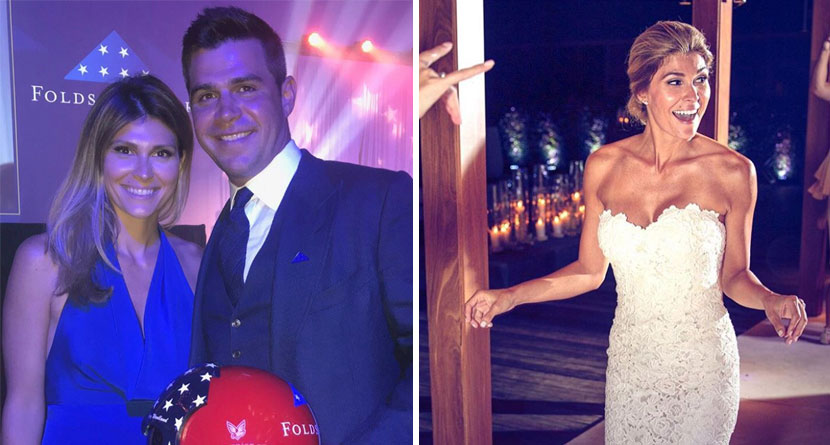 Gary Woodland’s U.S. Open triumph on Sunday at Pebble Beach was years in the making after the Kansas Jayhawk made the decision to give up collegiate basketball, and concentrate on golf in the early 2000s.

That decision paid off in spades as he raised his first major championship trophy on Sunday evening. While his parents were behind the 18th green to congratulated him, Woodland’s wife and young son were back home in Delray Beach, Florida.

Woodland married Gabby Granado in 2016 on the beach in Turks and Caicos. Since then, the couple have had a harrowing time together as Woodland announced in 2017 that the couple lost one of their expectant twins in utero.

“I do want to thank a couple special people in my life that are here tonight and have really helped me get to where I’m at today, and that starts with my wife who is my rock,” Woodland said at his induction in the Topeka Hall of Fame in June of 2017. “She has the responsibility now of dealing with me on a daily basis; she has to deal with my good rounds and when I’m happy and when I’m power-pouting after my bad rounds. She has to deal with that roller coaster. She’s taught me more over the last 14 weeks about family and strength and fighting, dealing with the pregnancy we’ve been dealing with. I can’t thank her enough; I love her to death.

In the aftermath, Gary and Gabby welcomed their son, Jaxon, to the world 10 weeks early at just 3lbs. Nearly two years later, Jaxon is approaching his second birthday as a happy and healthy child, while the Woodlands are expecting to grow their family by two as identical twin girls are expected to join the family in August.

Thanks @rallyfoundation and Brian and Ashley McCann for putting on an awesome event. Oh and my date @gabbygranado didn't look too shabby either

Nice to get away from the grind with @gabbygranado. Perfect way to recharge the mind and body before the big summer stretch.