Mercedes-Benz’s Golf Cart of the Future 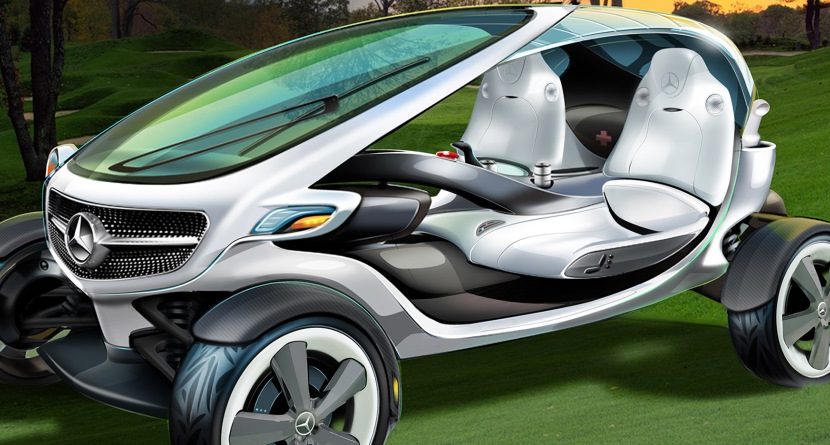 Mercedes-Benz may have designed the most outrageous and awesome golf cart ever. But the key word there is “designed.” The luxury car maker has no plans of actually building one of these carts.

The company earlier this year asked for ideas from golf fans and car aficionados on their dream cart. It received plenty, and designed a masterpiece.

Among the features of the futuristic “Vision Golf Cart,” which was unveiled over the weekend at the Open Championship, are a “fore button,” an iPod docking station, and functionality to allow either passenger to drive. It sports a car-like look and runs on electric power, which can be generated from the solar panels on the roof. The fore button may be the most awesome feature that you hope you never have to use. It sends a warning signal to other carts nearby, alerting them to a wayward shot.

The iPod docking station isn’t much of a surprise, considering how much people are attached to their music these days. Apparently, they now want it on the golf course too, because that quiet time between shots is too much to handle.

Music isn’t the only luxury. The cart features air conditioning, or neck-level heating should you be teeing off before the morning dew has disappeared. To keep that air in, you can keep the lightweight doors on the cart. There’s also “heads-up” display in the windscreen that shows the course layout, scorecard or weather.

And what golf cart isn’t complete without drink storage? There’s a small refrigerator stuffed under the center console; it can also act as a warmer for those breakfast burritos. Likewise, the cup holders can either heat up your coffee or cool down your beer. The seats boast heat controls too.

And being a Benz, the diamond grille is up front, with the famed logo also on the back – affixed to a storage compartment – and at the center of each wheel. It definitely looks like a Mercedes-Benz.

Too bad no one – at least in the near future – will ever drive one.

Other Hot Links:
– Phil Mickelson Adds 5th Major
– Back9 in 90: Phil’s Phenomenon
– Much Has Changed Since Tiger Woods Last Won A Major