Michelle Obama Teams with SNAG Golf to Get Kids Healthy 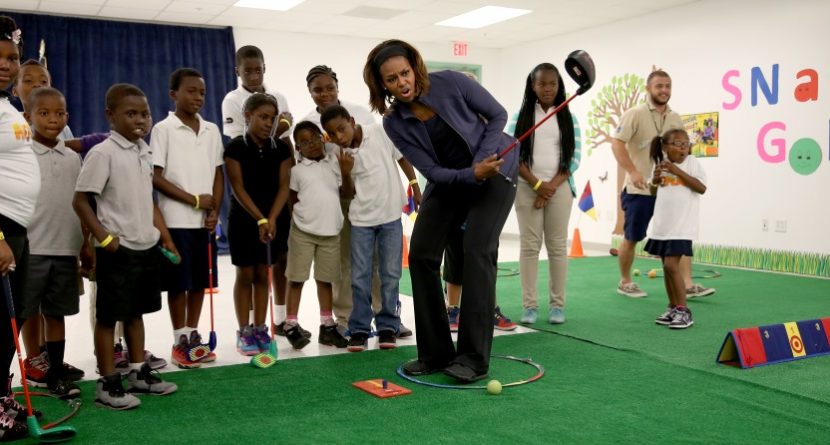 First Lady Michelle Obama embraced the great game of golf this week as part of her “Let’s Move!” campaign to promote healthy lifestyles for children. And she enlisted the help of SNAG Golf and actress Amy Poehler.

The “Parks and Recreation” star was a great choice to help Obama because the event took place at an actual parks and recreation center – the Gwen Cherry Park NFL/YET Center in Miami.

“It’s a real honor to be here this afternoon, and it’s especially exciting for me to learn that if you play a character with a certain career long enough, people will treat you as if you actually have that job,” Poehler joked. “So this might be a shocker, but I am actually not a deputy director of parks and recreation.” She was also a fantastic choice because even though she’s played virtual golf with Jimmy Fallon and Tiger Woods, she appears to be a novice golfer. That’s where SNAG – which is an acronym for Starting New At Golf – comes in.

A global leader in player development and grow-the-game initiatives with unique equipment and training tools, SNAG has partnered with Miami Parks and the National Recreation and Park Association to introduce golf to kids throughout south Florida. SNAG is currently used in 42 countries and 15,000 schools around the world and allows golf to be learned and played in non-traditional venues, such as on a soccer field, in a gym, on the beach or any open space.

For more help with her initiative, Obama also teamed up with noted golf aficionado Will Ferrell this week:

And last month she got some assistance from the video-bombing Miami Heat when the team visited the White House:

Related Links: President Obama Has a Thing for Golf