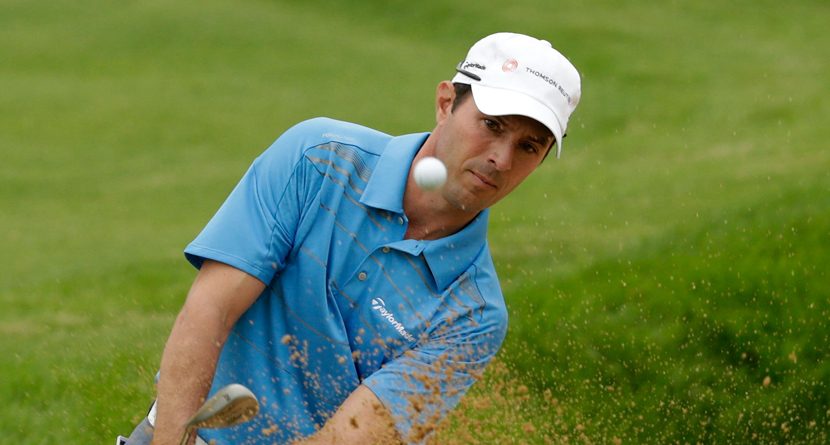 Mike Weir became a Masters champion in 2003, giving him eternal status as a green jacket holder.

It was the only major victory of his career, although he’s been close to victory at the other three majors. And now he is making the jump to winemaking.

That’s right, Weir went from smashing golf balls off the first tee to stomping on grapes to make wine (that might be a stretch, but you get the idea).

The Canadian, who now lives in Utah, actually launched his wine brand, Mike Weir Wine, in 2005. All of the wine is produced at Château des Charmes in Niagara-on-the-Lake, Ontario.

The wine has come to be recognized across the world as a solid choice. Mike Weir Wines makes seven brands ranging from a Riesling and a Chardonnay to a Cabernet-Merlot. It’s sold in stores and also on mikeweirwine.com.

Weir is also experimenting with his own mini vineyard at his Utah home. Along with the assistance of Adam Pearce, the Mike Weir Wines winemaker, Weir produced his first barrel last year.

“When I am home, I’m out there,” Weir told The Toronto Sun. “I trim … I spray … I have newfound respect for the work that goes into winemaking. It’s a lot of work.”

So is playing golf. And it’s probably equally as taxing on your back. With winemaking, you’re constantly bending over (we assume), lifting things, etc. In golf, the back and core make up the foundation of the golf swing. Twisting for every swing can get tiring after a while.

The Sun highlighted two of Weir’s wines in its story: A 2010 Reisling, which the paper describes as having “a hint of sweetness [that] makes this a seriously good wine to sip by the glass or an enjoyable match for spicy Italian sausages or barbecued pork chops.”

And of the 2009 Chardonnay, the paper writes, “Seriously made, affordable Chardonnays like this are always in fashion. The mix of citrus and vanilla adds instant appeal to a wine that is marked with a fresh, crisp character. A solid match for grilled seafood or chicken.”