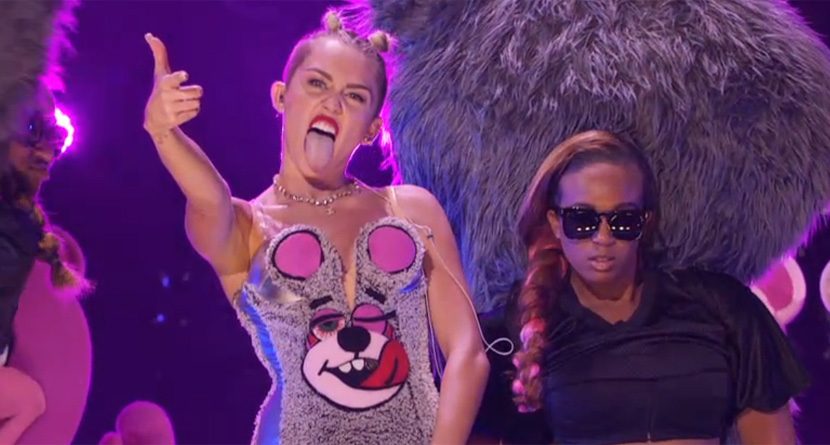 If you were fortunate enough to watch the 2013 MTV Video Music Awards, you had the pleasure of witnessing Miley Cyrus go absolutely insane on stage. People will be talking about her performance for years to come – which is exactly what she wanted – and millions of young female fans were preemptively grounded for life.

Unfortunately for the human race, Miley’s twerking didn’t stop at The Barclays Center in Brooklyn. We at the Back9Network have obtained exclusive photo documentation of the rampage that has become Miley Cyrus.

(Warning: These photos are enough to break apart your achy heart.) Before shocking the world at the Barclays Center, Miley made a surprise visit to The Barclays earlier in the day. Like a wack-a-mole from hell, Cyrus emerged from a greenside bunker, grabbed her crotch, stuck out her tongue and immediately gave Tiger Woods back spasms. This is the playoffs, Miley. Have you no tact? She continued to follow Tiger around all weekend screaming “Baba Booey” and “Sweet Niblets” whenever people stopped paying attention to her. As it turns out, Miley has been on a rampage long before Sunday. Here we see her in bed next to snoozing PGA Champ Jason Dufner. There’s no telling what Amanda Dufner was thinking when she snapped this photo, but we can only assume she was hypnotized by Miley’s siren-like pointy hair nubs and a complete lack of buttocks. We also learned that Miley and Paulina Gretzky are friends, at least as far as this shocking photo dictates. Heaven help us if Paulina’s man, PGA Tour star Dustin Johnson, gets a hold of this. This is absolutely disgraceful. Not happy with all of the attention Jason Dufner’s new dog was getting, Miley shrunk herself down to Chihuahua size and climb into the Wanamaker Trophy! Just who does she think she is? I certainly hope Dufner cleaned that trophy before placing his puppy back in it.

All The Pretty Crazy Ladies Believe it or not, Miley made her way to a concert Beyonce’ performed later Sunday evening in New Jersey. Besides the fact that Beyonce didn’t have a concert in New Jersey last night, this photo is incredibly disturbing. Not only has Miley resorted to dressing up like a fishing lure, she’s also stealing the attention from one of our generation’s greatest artists. For shame. Sweet frozen Walt Disney!  The Empire of the Ears would certainly love for everyone to forget who created Miley.  So few of their child stars ever act out like this except for almost all of them. Finally, as if she wasn’t animated enough, Miley crossed over to Springfield where she was still the least three dimensional character around. Doesn’t she know that Homer’s cholesterol is about 2,000 from the years of eating donuts and drinking Duff beer? Someone is going to get hurt.

Other Hot Links:
– 11 Best Nike Commercials
– 13 Most Memorable Moments from PGA Tour’s ‘Regular Season’
– Back9 in 90: Empire State of Mind