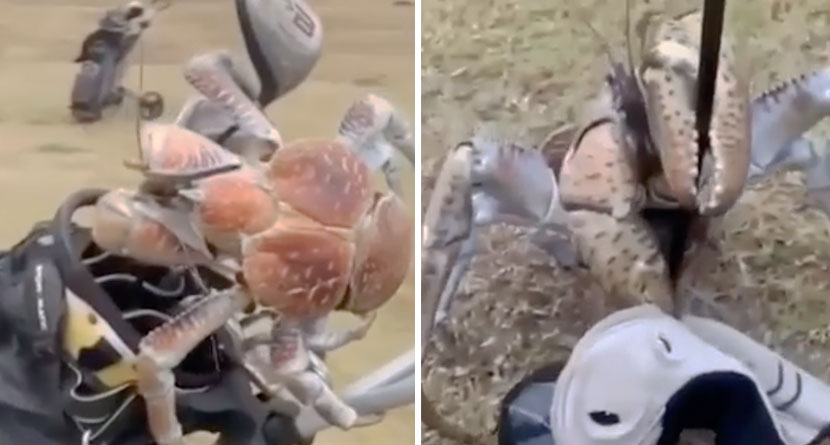 As we ease ourselves into the New Year, let’s begin by truly terrifying the living bejeezus out of golfers who don’t live Down Under.

A video is making the rounds, originally posted on Reddit, of a monster crab climbing and attaching itself to a golfers’ clubs on Christmas Island, just off the coast of Australia.

The video, which was originally shot in October of 2020, is going viral after being posted to the social media site and shows a large coconut crab, also (aptly) known as a “robber” crab, latching onto the club heads of a golfer’s bag, including his TaylorMade Burner driver.

“And that’s why we call them a robber crab,” Christmas Island local Paul Buhner, who filmed the video, narrated. “And we have not put this here, this has climbed up here while we’ve been putting out. He’s got a bloody good grip on it – look at that.”

And the grip was more than “bloody good,” it was enough to break the shaft of the driver. Buhner warned his friend to tread lightly as he could lose a finger, and if that shaft is any indication, a finger wouldn’t have stood a chance.

The coconut crabs are indigenous to Christmas Island, a territory located in the Indian Ocean about 930 miles west of the mainland, and are the world’s largest terrestrial arthropod.

So the next time you need to find your golf ball among a gaggle of geese, just know that it could be worse.