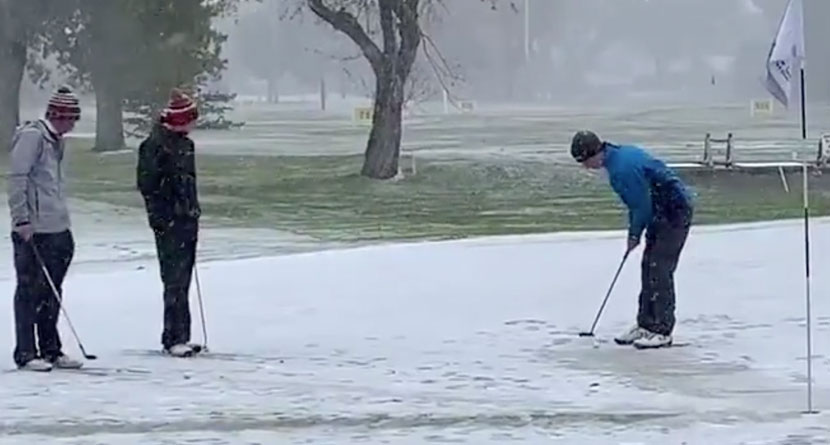 Part of the beauty of golf is that no two days on the course are exactly the same.

While that typically means that a player may be battling a slightly different miss or dealing with a change in wind direction, things were taken to the extreme earlier this week in the Montana Class AA High School State Golf Tournament.

The two-day event being held Meadow Lark Country Club in Great Falls is no stranger to adverse weather conditions as fall inches its way towards winter, but the dramatic change in conditions from day one to day two was obvious this year.

However, this was Montana, and a city that averages 58 inches of snow per year, according to Sperling’s Best Places. That still doesn’t make the visuals to come out of the event any less jarring. Great Falls resident Richard Ecke was on hand to take video of the conditions as the players attempted to navigate a snow-covered green.

While the differing putting styles on display were all impressively effective, what was more so was the scoring put together by eventual champions on both the girls’ and boys’ side, the Bozeman High School Hawks.

The snow began to fall in earnest as the competitors reached their back nines on day two of the event and all four of Bozeman’s counting scores came from players who navigated the conditions with little impact upon their scores.

Eventual state champion, Justus Verge, shot rounds of 1-under par 71 and 1-over par 73 to post a 144 and claim the individual state title, according to The Billings Gazette.

Might have been even wilder for the boys leaders who finished about 15 minutes later. Here’s Bozeman’s Justus Verge playing his final hole. #mtscores pic.twitter.com/ahTY5xcgDa

“Man, I love golf,” Verge said. “This is pretty special.”

For the Bozeman girls, it was their fourth consecutive state title.

“Honestly, my ball flight wasn’t affected that much by the snow,” Bozeman junior Cooper Knarr said en route to a seven-shot improvement over her day one score to finish runner-up individually. “I stuck with what I was doing well, but putting was a struggle, just because of the slowness of the greens once the snow came down.”

And you think you love golf.