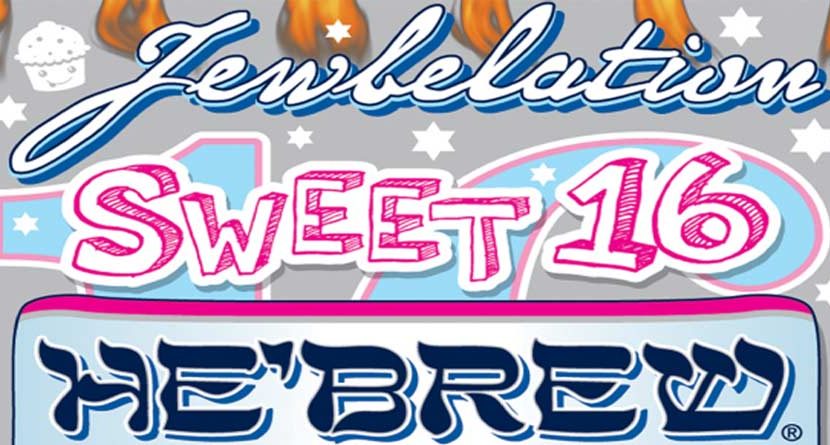 The first Chanukah candles will be lit the evening of Dec. 8. Another way to get lit would be to drink a 22-ounce bottle of Jewbelation Sweet 16 by oneself, so we don’t recommend it.

Not to make light of getting lit, but this 16 percent ABV beer from Shmaltz Brewing is an anniversary beer, celebrating, as the company puts it, “16 sweet years of award-winning beer and delicious shtick.” When you’re brewing beers called Messiah Nut Brown Ale, Genesis Session Ale, Origin Pomegranate Ale or Hop Manna IPA, you need a sense of humor. The Chosen Beers from the He’Brew line oblige.

A second line from the company is no more straight-faced — The Freak Beers from Coney Island Craft Lagers — including Mermaid Pilsner, Human Blockhead Imperial Bock and Albino Python White Lager.

Shmaltz was founded in 1996. Based in San Francisco, its beers are contract-brewed in Saratoga, N.Y., and distributed in 35 states. In 2004, it produced the first Jewbelation, celebrating its eighth anniversary with an 8 percent ABV beer with eight different hops and eight different malts.

The beer has escalated accordingly year by year, and Sweet Sixteen indeed includes 16 different malts (CaraMunich to Roasted Wheat), 16 different hops (Ahtanum to Zythos) and the ABV power to blow out the candles eight nights running. But for all its kitchen-sink attributes it’s a remarkably smooth brew with an alluring aroma and flavor complexity.

Pour this viscous beauty into a snifter glass, put your feet up, light a cigar, and enjoy the sweet swirl of figs, dark toffee, licorice and heat, a warming treat for imbibers of any faith and liable to turn skeptics into believers. And in the true holiday spirit, don’t forget to share.