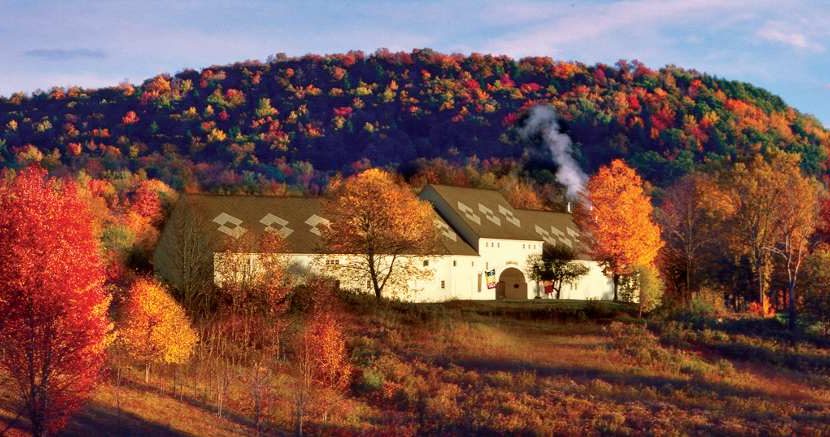 The baseball season will begin at the end of this month, thanks to a rare March 31 opening day. So it was nice to see colleague Steve Donahue’s recent salute to Cooperstown.

We have one recommendation to add for visitors of the beer-loving variety, the Ommegang Brewery, about 15 minutes south of town. Besides producing some of the finest Belgian-style beers in the country, the Belgian farmhouse brewery is a stunning structure in its own right, well worth a visit and tour.

Built in 1997 on 136 acres of a former hop farm (Cooperstown was a major supplier of hops in the nineteenth century), Ommegang was originally a partnership between the American beer importing firm Vanberg and DeWulf and the Belgian brewery Duvel Moortgat. Moortgat purchased the sole rights in 2003. The end result is a supply of superb Belgian-style beers free of high import prices (though some of the seasonal specialties and one-offs like the current Art of Darkness can get up there). The Hennepin has been a staple of the portfolio from the start. The brewery calls it a Grisette, a subspecies of Saison, lacking the latter’s sometimes lactic funkiness.

An effervescent golden brew, ballpark swill it is not. Hennepin manages to be simultaneously bracing, refreshing and elegant, with a perfumy nose and a sweet, peppery and spicy palate thanks to being brewed with coriander, orange zest, ginger and grains of paradise.

It’s a bit of paradise in a glass. It will pair well with Cooperstown, a baseball game or, frankly, just about anything.