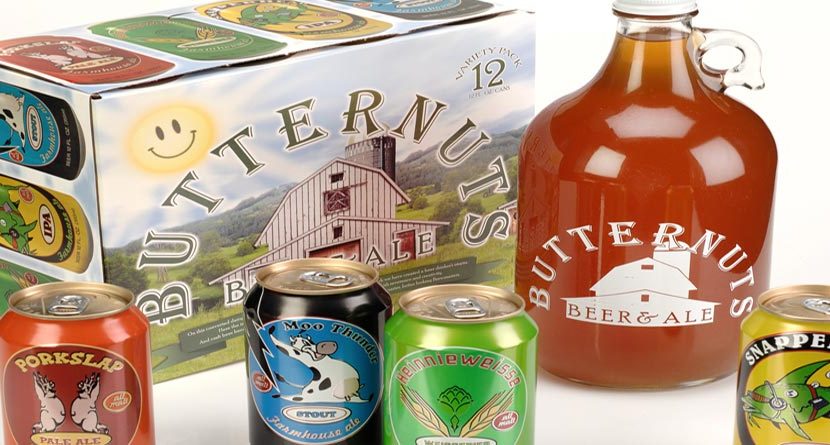 We’re sticking with a Cooperstown and baseball theme again this week. Butternuts Beer & Ale brews out of an old dairy barn about a half-hour southwest of Cooperstown and not that far from last week’s featured brewery, Ommegang.

A glance at the Butternuts website is evidence enough that owner Chuck Williamson approaches the craft brewing scene with more whimsicality than many, though he’s not kidding around about his beers, distributed to 14 mostly eastern states: Heinnieweisse Weissbier, Snapperhead IPA, Moo Thunder Stout and Porkslap Pale Ale.

At 4.3% ABV the Porkslap is an easy-drinking Pale Ale, a bit orangey in the glass, with a fruity and lightly caramel nose. I passed it around at a recent dinner gathering and folks were detecting clove or “some kind of spice” in the nose. Turns out it’s a touch of fresh ginger root, adding more zing to the overall impression than any particular hop attack.

It’s not a brew that will make serious beer geeks swoon, but it does have two pigs on the label art cavorting pork belly to pork belly, and has proved enormously popular, particularly in New York City. Popular to the extent that Williamson purchased the Cooperstown Brewing Company of Milford, New York in September and is now producing its English-style Ales (such as Old Slugger Pale Ale and Benchwarmer Porter).

And he also bought the nine-hole Tsuga Links in New Berlin, New York, rechristened it as Butternut Valley Golf and Recreation, which now has a predictably well-stocked beer cooler.