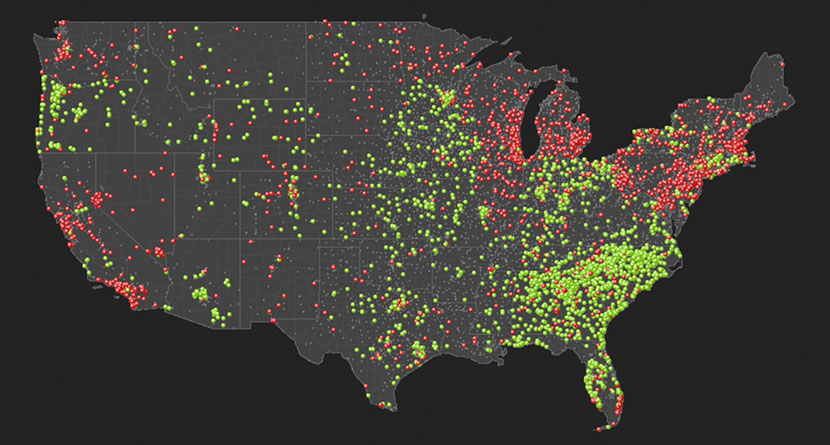 Golf courses around the country that have previously been closed or shut down are preparing to open back up, according to projections from the National Golf Foundation in its most recent report.

While many stay-at-home and shelter-in-place orders are set to expire in the next week, the northern-most portions of the United States are starting to experience their first whiffs of spring, the NGF predicts that nearly 60% of courses across the country will be open soon.

“As a few states ease restrictions on golf and warmer weather creeps further north, some have inquired how many more golf facilities are likely to open for play over the next few weeks as the remainder of the nation’s northernmost golf facilities “officially” open for the season,” the NGF’s report read.

For some, the golf season is still just getting started, virus or no. https://t.co/8GfGlxWus9#golfdata pic.twitter.com/OWdA4WDunQ

“To answer this question, we took a look at facilities in the area above the 45th parallel, where 8% of the nation’s supply is located,” it continued. “We reduced our estimate of potential openings by removing courses that are located in states where golf is currently not allowed. We are also able to factor in courses in Minnesota and Wisconsin, which have or will soon lift their bans on golf.” While brick and mortar shops are still in limbo as states begin to reopen, the NGF’s “golf itch index” combined with its findings as it pertains to COVID-19 anxiety paints an optimistic picture for consumer trends.

Among “core” golfers, the golf itch index is checking in at 80 out of 100, up marginally from last week, while the anxiety has dropped to 52 out of 100, down seven points from the week prior.

“Key to understanding golfer behaviors and intentions is understanding their emotional stability and response to the current situation,”  the report said. “One of the more direct ways to do this is to have golfers characterize their current anxiety level – when considering health, finances and concern for family and friends – on a sliding scale ranging from ‘Not anxious at all’ to ‘Extremely anxious.’

“Alongside that, we gauge their current ‘itch’ to play golf on a sliding scale ranging from ‘Much less of an itch’ to ‘Major itch.’ These sentiments, as you might expect, have some predictive power when observing current and expected behaviors.”

As such, the lag and dip in consumer searches for golf clubs are starting to see an uptick as the corresponding meters begin to indicate that more golfers are getting excited about playing while their concerns over the coronavirus are dropping.