Man Charged For Doing Donuts On Greens Of Trump Bedminster 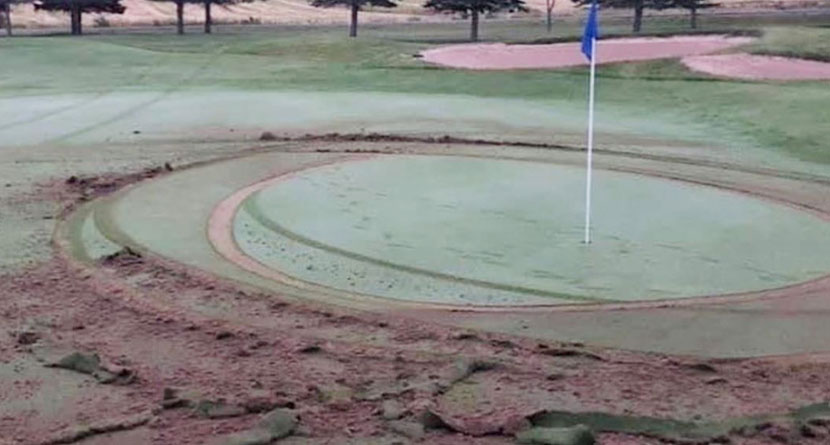 A New Jersey man was charged with criminal mischief for allegedly driving his car onto two separate greens at Trump National Golf Club in Bedminster, New Jersey earlier this month and doing donuts, costing upwards of $17,000 in damage, according to The Washington Post.

Richard J. McEwan, 26, was arrested on Monday at his home in Milford, N.J. after an employee witnessed a blue Ford Focus with a Rutgers sticker driving onto the green last Sunday. The witness was able to get a partial reading of the license plate, which led them to McEwan, according to the Somerset County Prosecutor’s Office.

McEwan was released on Tuesday and will return for a future court date. A Trump Organization spokesman told The Post that McEwan should be “prosecuted to the full extent of the law.”

A man has been charged with criminal mischief after police say he drove around Trump National Golf Club in Bedminster, New Jersey, doing “donuts” on the ground.

In a bizarre twist, McEwan was in custody of law enforcement officials the same day that the first reported damage was done to the course on September 3rd. McEwan had been arrested in Rhode Island for allegedly breaking into Taylor Swift’s beachfront home.

“A pair of orange shoes were found at the doorway where he broke in,” Westerly Police Chief Shawn Lacey told The Westerly Sun. “When officers asked him why he wasn’t wearing any, he told them, ‘I was always taught that when you go into someone’s home, you have to take your shoes off.’ He said he did it because it was polite.”

According to Rhode Island court records, McEwan was charged with breaking and entering and trespassing. He was released on bond, and later that day, the first instance of vandalism took place on the Trump Bedminster’s 11th green.

New Jersey prosecutors confirmed that McEwan was the culprit in both alleged crimes.

Trump Bedminster recently hosted the 2017 U.S. Women’s Open won by Sung Hyun Park, and the course is scheduled to host the 2022 PGA Championship.