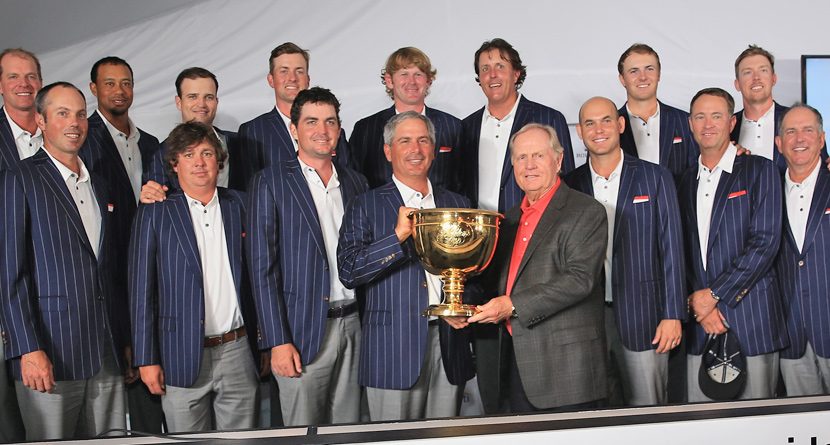 In case you were too busy watching Mother Nature win the Presidents Cup this weekend, here are a few notable news items you may have missed.

Tiger Woods hit the clinching putt against Richard Sterne at Muirfield Village to once again give the Presidents Cup to the Americans. This event is nowhere near as exciting as the Ryder Cup, especially since the Americans are now 8-1-1 all time. Maybe it’s time to just expand the International Team to include not only Europe, but all sea life, jungle creatures and most things you see in Walmart at 2 a.m. in the morning.

After a long, refreshing off-season of two weeks (or one week, if you played the Presidents Cup), the 2014 PGA Tour season begins this week at the Frys.com Open. Word has it that Johnny Miller convinced Fry’s Electronics to return to Silverado Resort, where Miller is a member. Rest assured Miller’s negotiation tactics included a maniacal stare and a single droplet of spittle resting on his lower lip.

Shortly after losing the Reignwood LPGA Classic in Beijing to Shanshan Feng, who is originally from China, Stacy Lewis took to Twitter to voice her displeasure with the Chinese golf fans watching her final round. The backlash that followed from her followers eventually forced Lewis off of Twitter altogether, which is absolutely ridiculous and unfortunate. Having America’s top golfer on a social media outlet can only help the LPGA and we would fully support Lewis coming back on our computer screens.

Francesco Molinari clinched the Seve Cup for his European teammates to defeat the Great Britain/Ireland team. It was the first time in 13 years that Europe won the exhibition event, but nobody likely noticed.

In non-golf news, many Americans returned to work this week due to a number of government companies calling off scheduled furloughs in the midst of the nation’s government shutdown. Now, hundreds of thousands of workers will experience the true American Dream of having to work while their bosses stay home.

Billionaire Dallas Cowboys owner Jerry Jones was spotted using an old flip phone during Sunday’s game against the Denver Broncos. This shouldn’t be a surprise to anyone, especially coming from a guy who still refers to the Mason-Dixon Line and believes “Snake” is the greatest mobile game every made.

During her monologue on Saturday Night Live this weekend, host Miley Cyrus joked about her controversial MTV Video Music Award performance where she “twerked” all over the place. Father Billy Ray Cyrus could not be reached for comment, mainly because I didn’t reach out to get a comment.

Seattle Seahawks running back Marshawn Lynch was fined $5,250 for wearing green cleats, which apparently is against some type of league policy. The development once again proves that the NFL really stands for “No Fun League”.