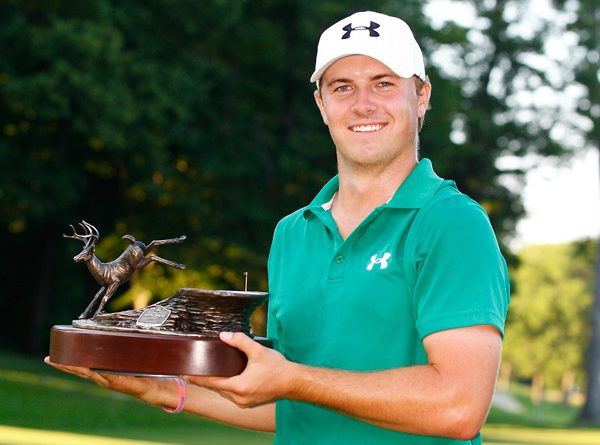 Just in case you were too busy finding ways to explain how Phil Mickelson won a tournament with the word “Open” in it, here are a few news items you may have missed:

1) Jordan Spieth Earns Spot in British – With his win at the John Deere Classic last weekend, 19-year old Jordan Spieth booked his trip to this week’s Open Championship at Muirfield. While he is a long way from being considered “great”, could Spieth be the new face of American golf in a few years? Stay tuned.

2) Phil Mickelson Earns a Thumbs-Up in Scotland – Playing the Scottish Open as a warm-up to this week’s major, Lefty went low and won the tournament in impressive fashion. Mickelson doesn’t typically play all that well at the Open Championship, but he’ll tee-off on Thursday with a ton of confidence after last week’s victory. 3) Tiger Says His Elbow Is Ready – Tiger Woods has been nursing a wounded paw for a few weeks now after tweaking his elbow at The Players and aggravating it at the US Open. While Muirfield is forecasted to be dry and hot this week, Woods will need to stay out of the thigh-high weeds if he hopes to stay healthy all four rounds.

4) Muirfield Still Hatin’ on the Ladies – The site of this season’s third major is a male-only private club, so the obvious question of gender equality has come up a few times this week already. While none of the competitors in the field are sharing their opinion on the generations-long policy, you can count on this being a hot topic throughout the weekend.

6) Bear Grylls Launches Survival Academy – I don’t know about you, but when I think of “having a good time” there’s no place I would rather be than in the Catskill Mountains trying to stay alive. Thanks to survival nut-job Grylls and his new Survival Academy, I’ll finally have my chance!

7) Metta World Peace Signs with Knicks – After being amnestied by the Los Angeles Lakers earlier in the week, MWP quickly found a new home in New York with the Knicks. Can you imagine the movie ideas running through Knick-fan Spike Lee’s head? I can already smell an Oscar. 8) Johnny Depp to Star in ‘Wonderland’ Sequel – You know what’s the best way to follow a major Hollywood flop in the theaters? Starring in another ridiculous sequel to an equally-awful movie you made a few years prior! Johnny Depp will do exactly that by reprising his role as the Mad Hatter in an Alice in Wonderland sequel.

9) JK Rowling is Really, Really Sneaky – The Harry Potter author has come out as the pen behind her pseudonym Rob Galbraith, the author of The Cuckoo’s Calling. We should have known something was up when the book’s main character started riding on a Nimbus broomstick.