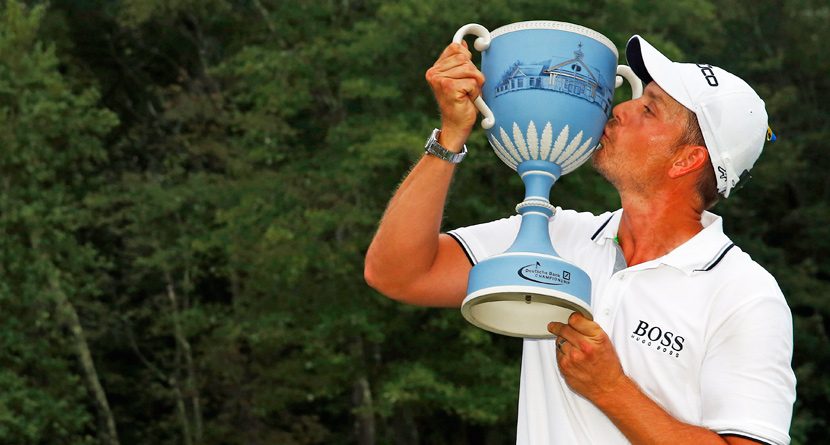 In case you were too busy attending family barbeques or watching Johnny Football make a fool out of himself, here are a few things you may have missed this weekend.

1) Henrik Stenson Wins The Deutsche Bank Championship — As one of the most consistent players on the PGA Tour this season, Stenson finally broke through for a victory at the 2013 Deutsche Bank. Now with three wins in his PGA Tour career, Stenson will hopefully be able to afford a shirt with sleeves that fit his arms soon. 2) Stenson Dethrones Tiger From Point Lead — With his win this week, Stenson is now the FedExCup points leader over Tiger Woods. Both men have obviously qualified for the BMW Championship in two weeks, but now Tiger is a little bit further from the $10 million prize.

3) Suzann Pettersen Defends Title at Safeway – The 32-year old Norwegian successfully defended her title at the Safeway Classic in Portland, Ore. Pettersen closed with a 5-under 67 to finish at 20-under overall for the title, which was the 12th of her LPGA Tour career.

4) Colin Montgomerie Wins First Senior Title – It was six years since his last tournament victory, but Colin Montgomerie is once again a winner after capturing the Travis Perkins plc Senior Senior Masters. His final round of 70 was enough to give the new Hall of Famer a 10-under total overall, translating to his first senior tour win in three starts.

6) iPhone Release Date Confirmed? – It appears that the release date of the new iPhone 5S – September 20 — has been leaked by an Apple employee’s office calendar. You know, that thing that is supposed to be kept confidential for large corporations? Damn you, Internet. You’ve got no regard.

7) Caroline Wozniacki Stunned by 136-Ranked Player – Rory McIlroy’s professional tennis-playing girlfriend was stunned by her U.S. Open defeat at the hands of Italy’s Camila Giorgi. Wozniacki, a former world No. 1, lost in three sets to Giorgi, who is ranked 136th in the world.

8) Jamie-Lynn Sigler Leaks Photo of new Baby – The former Sopranos star recently snapped a photo of her holding hands with her newborn son, Beau, according to People Magazine. This is incredible news, of course, since we can all now confirm that Sigler knows how to use a camera. Thanks People Magazine!

9) Dunkin’ Donuts in Hot Water over New Ad – Finally, the Idiot of the Week award goes to Dunkin’ Donuts for their new charcoal donut ad campaign that depicts a woman wearing blackface. Who in the world thought this was a good idea? I’d love to have sat in that marketing meeting. “Hey, guys… you know what would be great? Something wholesome and subtly racist.”