Nick Saban: Golf Is A Metaphor For Life 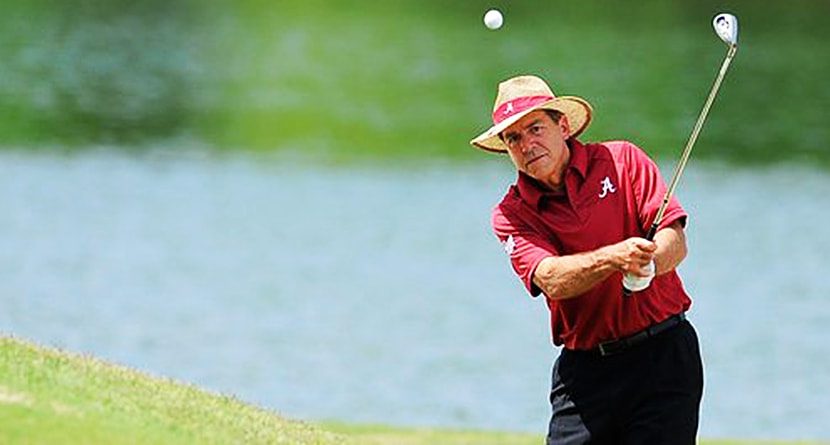 Alabama head football coach Nick Saban is one of the most successful people in sports. Quite the golf enthusiast, Saban takes time to head over to the University of Alabama golf course to work on his game and spend time with the golf team fairly often, according to former Crimson Tide golfer Justin Thomas.

Given that love for the game, Saban explained in an Q&A with Fox Sports’ Bruce Feldman just how influential golf is on how he coaches his players on Saturdays and beyond.

I brought up to Saban a quote I once heard from the legendary Wake Forest golf coach Jesse Haddock that “score is the result of execution.”


Saban: Golf is a great example to me. Golf is a metaphor of life. I mean, every shot. You have this beautiful hole, this beautiful opportunity to get a good score. You hit a beautiful drive. Well, I don’t know how many times I’ve been 114 yards from the hole and made double bogey.

Well, I hit a great drive, but it doesn’t matter. It’s only the next shot that matters. You could hit that in the water, which means now you have to overcome adversity. You put yourself in a hole and it’s, “Can I get up and down and still make bogey?” But that’s how life is. Sometimes you don’t control it. You don’t control the negative things that happen. But you still have to overcome them. You still have to manage it. You still have to react the right way. It’s not the problem. It’s how you respond to the problem that is the key to the drill. You’ve got to keep harping on this stuff all the time.

[h.t GolfDigest.com for bringing this to our attention]