No Butts About It, Jason Dufner Has His Hands Full 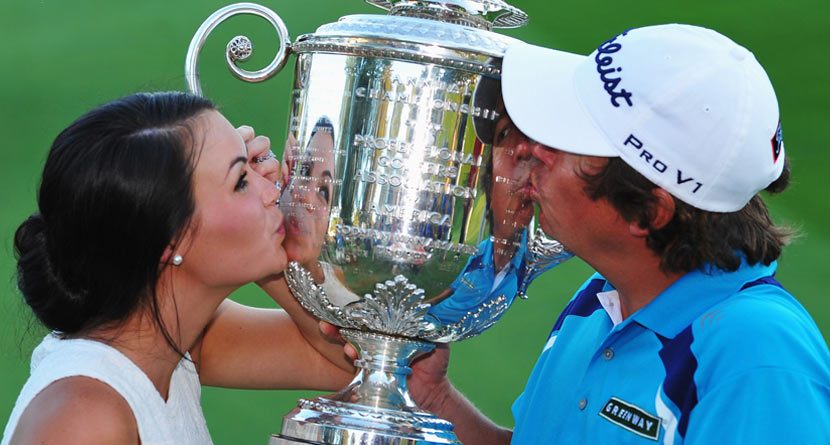 Moments after becoming the newest major champion of 2013, Jason Dufner embraced his lovely wife Amanda on the 18th green at Oak Hill Country Club. You could see his shoulders slump ever so slightly as if the weight of the world was lifted from him. A smirk – about as much as we could hope from a man described as being “melancholy” – crept across Dufner’s face.

Then, as the loving couple walked off the green, Jason Dufner patted his wife’s behind. Twitter exploded.

We’ve all had that moment when everything seems right in the world and all that you care about is right there in front of you. Some people may have more moments like these than others, but when they happen they stay with you forever. There are no other cares in the world; there are no rules.

That’s why when Jason Dufner showed a hilarious form of affection to his wife on Sunday, the world accepted it with open arms (and hands, apparently) and all shared a collective laugh. Do not judge Dufner for his casual display of public affection. Do not label him as “offensive” or “chauvinistic”. Doing so would be wrong and would say much more about you then Jason Dufner.

Instead, accept the situation for what it was: a man lost in a moment that he shared with the woman he loves most. It was beautiful in its hilarity and – as Dufner has repeatedly reminded us all in the past – showed how he is just an average guy who is no bigger than the game than you or I.

Well played, Jason. Quite frankly, you earned it.