Norman Has A Plan To Disrupt The Golf World 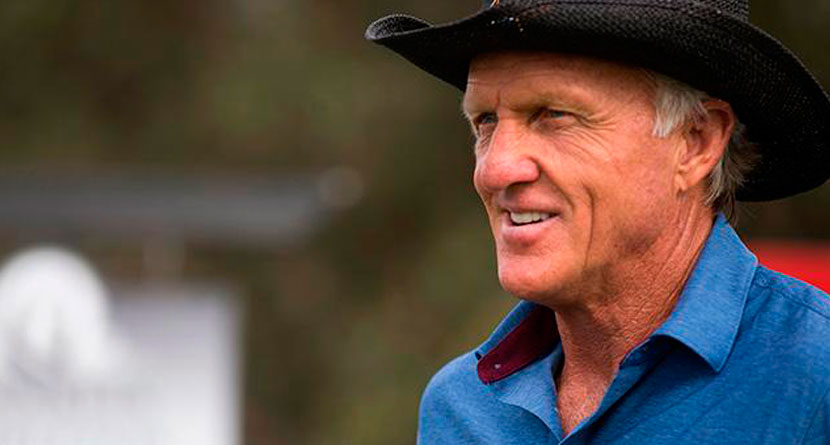 Greg Norman has become one of the savviest businessmen in golf since he stopped playing competitively around the turn of the century. While his golf clubs brought him worldwide fame, his business acumen has kept him in play for the better part of the last two decades.

Now, with a new endorsement with Verizon, Norman has made some big promises about how he plans to disrupt the golf world in 2017. ScoreGolf.com’s

ScoreGolf.com’s Rick Young was on hand at a Mexican course opening last month in which Norman teased his plan.


By his own admission the Shark is planning to rock golf’s paradigm. He will do so, he says, in partnership with Verizon, the communications giant with whom he recently signed an eight-year deal. Verizon, incidentally, has never been associated with the golf industry on any level. That is until its hook up with Norman through 2024.

All of this and more came to light at the launch of his newest design, the Greg Norman Signature Course at Vidanta Neuvo Vallarta, Mexico last month. Norman hosted a fireside chat for eight media members, speaking at length on all Shark-related matters both on and off the golf course. The most fascinating aspect of this one-hour media session, however, was the end. Why the end? Norman turned the tables on our small group gathering. He became the interviewer.

“Let me ask you guys a question, you all have your fingers on the pulse of this: Where do you guys see the USGA, the PGA Tour, the R&A going? Where do you see corporate dollars moving, networks, sponsorship. Where is this game heading?” Norman asked.

Next question to us: “Is golf out of sync because the USGA, PGA Tour, PGA of America, R&A and the other institutions are out of sync? Do you think they have their constituent’s best interests at heart when they do what they do?” the Shark inquired.

“In the middle second quarter of next year, I’ll invite you guys down to my office,” he said. “We will tell you exactly how we’re going to break this cast iron that’s been wrapped around golf for so long. We’re going to shatter it. The institutions (USGA, R&A, PGA of America, PGA Tour) will eventually buy into it because they will have to buy into it. They won’t have a choice.

“I can tell you this: by the third quarter of next year we’re going to market with a new product. You guys are going to say ‘Wow, nobody has ever thought about this,’” said Norman with a grin. “The partnership with Verizon goes beyond golf. They have never been involved with the game before and now they’re my partner going forward for the next eight years. It’s related to golf to some degree but totally related to some other places. These are the opportunities I have always seen within the company but I never had the right personnel or opportunity to do it.”