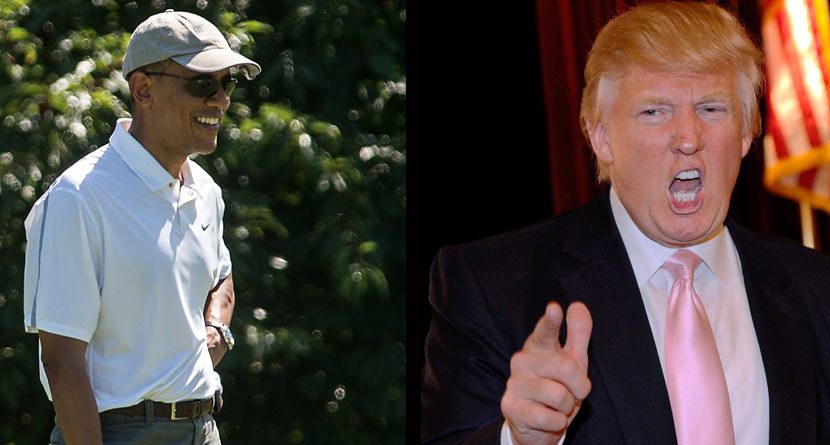 Over Labor Day weekend, President Obama tried to play some golf at a couple of America’s top tracks. The operative word there being tried. Being the President of the United States of America has plenty of perks. Apparently, getting onto Winged Foot Golf Club or Trump National Bedminster are not among them.

According to sources, Obama’s team called a number of courses looking for tee times but were rebuffed at every turn. Most courses didn’t want to inconvenience their members with the circus that is having the president play your golf course. Only once do you have to be on the outside looking in at this production to understand exactly what I mean by circus.

After hearing this story, Donald Trump offered President Obama the opportunity to play for free at any of his golf courses for life — on one, very large and unlikely condition:

If Obama resigns from office NOW, thereby doing a great service to the country—I will give him free lifetime golf at any one of my courses!

Obama is just a few weeks removed from his annual two-week jaunt through Martha’s Vineyard, which included a stop at Farmneck Golf Club with Ray Allen and Back9Network’s Ahmad Rashad, as well as a round on my old stomping grounds, Vineyard Golf Club.

Listen, if the man wants to unwind by doing something even more stressful than running a country, let him do it. And while Trump’s offer was pretty generous, I’m sure Mr. Obama isn’t paying for too much golf these days, anyway.